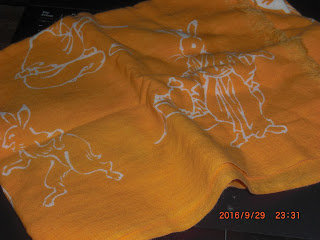 Not sure how that folded piece of fabric is used in your part of the world or if it even exists in your country, but here in North America, the good old handkerchief seems to merely have two uses if it is even used at all anymore: showing or blowing. However in Japan, the hanky is still a fairly essential piece of the wardrobe all the way from childhood into adulthood. I amassed a good number of handkerchiefs during my time there since I definitely needed them during the summers to mop my brow. And when it came to visits to public washrooms in the early years of my stay, they also came in handy after washing up (nowadays a lot of the places have those Dyson hand dryers); and believe me, the majority of those JR and Tokyo subway stations often made people forget that Japan is seen as one of the cleanest nations on Earth.


Earlier today, I wrote an article involving a Hiromi Ohta（太田裕美）song, and of course, she is famous for that sunny and cheerful breakthrough hit, "Momen no Handkerchief"（木綿のハンカチーフ）in 1975. So, ironically enough, I'm going for another song involving that pocket square but this one is more somber. And it's called "Akai Hankachi" (Red Handkerchief), a Yujiro Ishihara（石原裕次郎）song from 1962. It became such a hit that the powers-that-be decided to expand it into a movie a couple of years later which seemed to have been the custom with hit songs in Japan in the middle of the 20th century.

The movie is described as follows from a 2008 press release of the Monthly Classics Series presented by The Japan Society in New York City:

Red Handkerchief defines Nikkatsu’s "mood action" aesthetic. In the film, Ishihara plays Mikami, a detective trying to crack a big drug case that goes awry when he fatally shoots the witness. After four years in exile, Mikami returns to Yokohama to determine the truth about the unsolved case and his shady ex-partner, who is now married to the woman he loves. Series curator Mark Shilling notes, "In the ultimate Nikkatsu ‘mood action’ movie, the passionate reunions between Ishihara and Asaoka in Ishihara’s seedy hotel room have a ripe romanticism, soaked in noir atmospherics, that makes comparisons with Casablanca not absurd." Nikkatsu studio star Joe Shishido (A Colt is My Passport, Branded to Kill) hailed Red Handkerchief as "the best Nikkatsu Action movie."

Looking at the first 4 minutes of the movie as shown in the above video, it certainly starts off with a hard-boiled simmer as punches are quickly thrown in a dark abandoned part of town. Incidentally, the tec partner of Ishihara's Mikami is played by Hideaki Nitani（二谷英明）, another actor who along with Ishihara would become bosses in their own separate TV cop shows in the 1970s. Maybe some of the head honchos in the television industry remembered those two from "Akai Hankachi" and "promoted" them to squad chiefs. Moving on, from seeing that opening and some of the scenes in the other imported videos below, Shilling may have been onto something when he made that comparison to the legendary "Casablanca" which happens to be one of my favourite old movies.


It was interesting seeing The Big Man crooning the song as above through the bar-packed streets (reminded me of the mock-up of 1960s Tokyo at Yokohama's Ramen Museum). Remembering Ishihara as the tall and lean young tough who drummed up a storm in the 1950s and then as the burly seen-it-all father figure in his cop shows of the 1970s, he looked like he was in transition above. He wasn't nearly as gangly in the 1960s and there was a bit more grizzle about him. Plus, his singing style with "Akai Hankachi" had me reminiscing about his later years as the inveterate Mood Kayo singer with a bar surrounding him and a tumbler of Old Parr in his hand.


The full recorded version of "Akai Hankachi" sounds a bit more enka than the Latin-infused version that starts the movie and the performance by Ishihara when he strolls the streets. Written by Shiro Hagiwara（荻原四朗）and composed by Kenroku Uehara（上原兼六）, the original version's arrangement has me thinking more of a traveling ronin in the Edo Era rather than an intrepid detective in postwar Japan, aside from the trombone. Hagiwara's lyrics also take things into a more rustic setting as Ishihara sings about a man perhaps looking from afar at his former belle dabbing her tears with that red handkerchief (perhaps his) under an acacia tree, probably lamenting that he will never meet her again.
Posted by J-Canuck at 11:36 PM