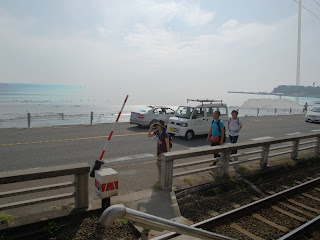 Yup, summer is indeed coming to an end for another year, and though I'm not sure how the season was where most of you are, outside of Toronto and Japan, it was definitely a scorcher here in T.O. And I'm saying this as a fellow who lived 17 summers in the Tokyo area where I used to swim not walk through the atmosphere. To be honest, I'm not a huge summer fan in terms of the humidity so I'm quite glad that fall weather may finally look kindly upon us in a few days' time.


So perhaps it is appropriate that before summer officially goes out like a lion, I throw in one more summery song...or at least something with the word "summer" in the title. And here I have Tohoku Shinkansen's（東北新幹線）"Summer Touches You" from their lone 1982 album "Thru Traffic".

A few weeks ago, I encountered my first song by this duo consisting of guitarist Hiroshi Narumi（鳴海寛）and songwriter Etsuko Yamakawa（山川恵津子）from the same album, the oh-so-comfy "Tsuki ni Yorisotte"（月に寄りそって）. Well, "Thru Traffic" starts off with "Summer Touches You", a mid-tempo number created and sung by Narumi that has a great City Pop intro and some nice George Benson-style canoodling on the guitar. The fellow on the Japanese-language music blog "Music Avenue" keyed me in on the Benson comparison, and he remarked that as soon as he had heard those first few measures of "Summer Touches You", he was assured that "Thru Traffic" was going to be one solid album.

I actually looked for the album at my usual sources of Tower Records and CD Japan in the hopes of purchasing it but unfortunately it's not there anymore. There were a few copies of it at Amazon but the cheapest one in the lot started from the 7000-8000 yen range which is way too rich for my blood. At this rate, I can only hope that one of the readers of "Kayo Kyoku Plus" is a Tower or CDJ procurement employee who could somehow aim to get a few of those CD versions back on sale for "Thru Traffic". Pretty please.

Let's all look forward to autumn!
Posted by J-Canuck at 10:02 PM