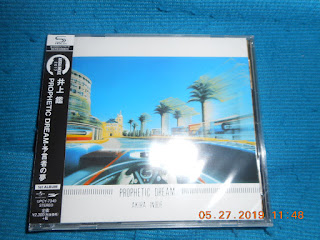 Considering it's a Friday and since the previous two entries I've put in aren't City Pop in nature, let me throw in a third article for my favourite Japanese music genre.


This is quite a fascinating one by singer-songwriter Akira  Inoue（井上鑑）. A couple of months ago, I wrote about his 1982 album "Prophetic Dream" which has quite the concept of Inoue going back and forth in time with songs to adorn those temporal skips. As such, he also did quite a bit of skipping across the genres of City Pop, AOR, New Wave and pop.

Well, I was kinda surprised that this particular song hadn't been included in "Prophetic Dream" since "Apocalypse Sensen" (Apocalypse, At The Front) is a melodic quilt incorporating all those genres into one tune. It bursts out the gate with a constant hammering of piano that instantly reminded me of bands such as Hall & Oates back in the day, followed by a brief whimsical synthesizer that brings images of gleaming glass and steel buildings. The music then goes into City Pop musings reminiscent of material by Yasuhiro Abe（安部恭弘）; meanwhile, whenever Inoue and the chorus come in together followed by another synthy sound, I suddenly feel that "Apocalypse Sensen" is making dips into Buggles' New Wave. Perhaps I'm exaggerating a tad but the song is like Forrest Gump's box of chocolates.

Now, if "Apocalypse Sensen" didn't end up on "Prophetic Dream", where did it go? Well, it first became the B-side to Inoue's 3rd single "Subway-Dream" also from 1982. Strangely enough, that song is on the album but I couldn't find any video of it online. "Apocalypse Sensen" then became the last track on his 6th album "Undulation", released in February 1986.
Posted by J-Canuck at 10:48 PM