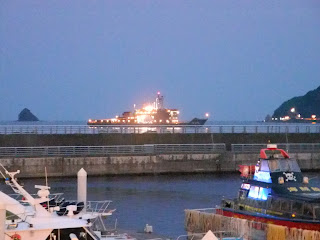 Last night, when I was watching the most recent episode of popular NHK educational variety show "Chiko-chan ni Shikarareru"（チコちゃんに叱られる!...Don't Sleep Through Life）, saucy CG host Chiko-chan was asked by one of the oldest tarento on Japanese TV, Shiro Ito（伊東四朗）, who was appearing as a guest whether she knew singer Yoshio Tabata（田端義夫）. Of course, Chiko-chan being a genius at most everything (by her own admission) knew who the late singer was by shouting out his nickname Batayan（バタヤン）, and then one of his biggest hits, "Genkai Blues"（玄海ブルース）started playing in the background.


"Genkai Blues" is a 1949 song that has already been covered by Noelle, and when it comes to Batayan's songs, KKP's resident enka expert is the go-to contributor. However, now that she is busy with her studies, she doesn't have too much time to spend here. So I thought I could also put in my Tabata tune.

With "Genkai Blues" taken, I took my usual route for any singer with a long discography and sought out Tabata's debut song. How did he start out in his career? Well, Batayan first made his splash in 1939 at the age of 20 when he recorded "Shima no Funauta" (Island Shanty) which was composed by up-and-coming composer (according to J-Wiki's file on Tabata) Haruo Kurawaka（倉若晴生）and written by Minoru Shimizu（清水みのる）. Listening to the scratchy original above, "Shima no Funauta" is a peaceful enka which seems to have the young Tabata out on some tiny boat in the middle of the ocean strumming on his guitar, contemplating the quiet life out there. Not sure which sea he had envisioned being on, but I can hear some Hawaiian in there.


As you can see from the thumbnail above, Tabata performed a very brief version of "Shima no Funauta" on a music show when he was 63 years old, so the broadcast was probably sometime in 1982. I also like his performance here with a grander arrangement brought about by the orchestra, and there's something about him in a classy tuxedo with that particular way of holding his guitar which made me think that he would have been at home on the Grand Ole Opry.