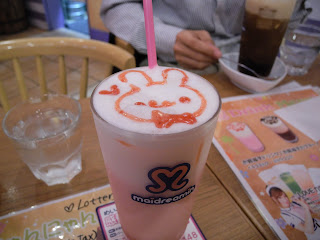 Frankly speaking, when it comes to literature, I was never all that high-minded. I did my assignments in high school and university and read my Shakespeare and then my fair share of Soseki Natsume（夏目漱石）, Yasunari Kawabata（川端康成）and Yukio Mishima（三島由紀夫）but never really got into them. I barely even remember my Banana Yoshimoto（吉本ばなな）. It was all comic books and "Star Trek" novels for me (mind you, I've been enjoying William Gibson's "Neuromancer" over the past little while), and I just donated a whole bunch of the latter to the local library a couple of weeks ago.


Perhaps then I can relate to Sumire Uesaka's（上坂すみれ）song "Bungou de GO!" (Go with the Literary Masters!) or at least the feelings of the heroine she depicts there. This cutesy techno-ditty was a part of her 7th single, "Koi suru Zukei (cubic futurismo)" （恋する図形）from August 2016 which became the ending theme for one of my favourite anime "Kono Bijutsu-bu ni wa Mondai ga aru"（この美術部には問題がある！）.

With a voice that sounds rather Betty Boop or perhaps even the character she portrays in the anime, the bubbly Collette, she talks about how sleepy she gets when she reads "War & Peace" and how dark she thinks "Crime & Punishment" is when she attempts to plow through that classic. All the while, Uesaka seems to want to have authors like Tolstoy and Natsume and Ogai and Dostoevsky have at it with each other, although considering the music, I think instead of having them duel with pistols out on a lawn, she would prefer the novelists crack each other over the skull with colourful balloons in a maid cafe.

The single itself reached No. 17 on Oricon and "Bungou de GO!" is also included in Uesaka's 3rd album "No Future Vacance"（ノーフューチャーバカンス）which came out at the same time as the single. I have to say that it's all very cute and moe, but I especially enjoy the theremin instrumental bridge near the end. Words and music were provided by Machio Machikado（街角マチオ）of The Puh（ザ・ぷー）.
Posted by J-Canuck at 1:43 PM