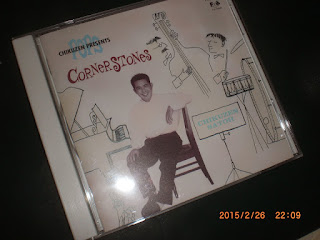 As we come to the end of another weekend, perhaps something soothing to prepare for the rigors of another work week is in order. So, why not come up with another lovely Chikuzen Sato（佐藤竹善）song? I'm really going to have to listen to his 1995 "Cornerstones" album once again to remind myself of some of the gems on his first solo album away from Sing Like Talking.

For all of those Sato fans, "Cornerstones" as you know is the series of albums of cover songs by Sato with some help from his fellow singing contemporaries. I've already written about a few of the tracks from the first album (which peaked at No. 5 on Oricon) over the years including the first track "No One There" which was originally recorded by Eric Tagg.

Over here, we have a duet featuring Sato and the sweet sounds of Hiromi Iwasaki（岩崎宏美）as they sing "I.O.U. Me", a cover of the 1987 single by BeBe & CeCe Winans. Let me say that I don't think anyone is going to top the Winans' original but Iwasaki and Sato still do a fine job with this slightly slower rendition of the soulful love song. I mean, I'm happy enough as it is that these two amazing vocal talents did come together to perform "I.O.U. Me" which was created by Billy Sprague, Keith Thomas, Michael Rapp, and Tom Hemby.