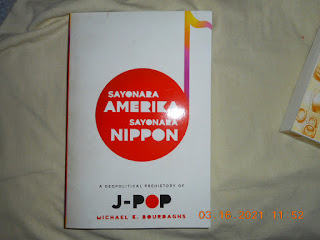 Happy Monday! Through the recommendation of fellow KKP administrator and contributor Marcos V., I purchased this book called "Sayonara Amerika, Sayonara Nippon ~ A Geopolitical History of J-Pop" (2012) by Michael K. Bourdaghs. It truly does tackle the music in Japan that occurred in the decades before the advent of J-Pop (which I think came about near the end of the 1980s during the Bubble).

So far, I've read about postwar singers including Shizuko Kasagi（笠置シズ子）, Hibari Misora（美空ひばり）and Kyu Sakamoto（坂本九）. It's been an interesting read just before bedtime although sometimes I think Bourdaghs tends to over-intellectualize in parts. Still, I've been all in for the chapter on the Group Sounds boom in the late 1960s and the author has presented three case studies in that chapter with the first study being on a legendary guitarist named Takeshi Terauchi（寺内タケシ）who's basically been lionized as one pillar of J-Rock. In fact, in his section, one critic even labeled the man as perhaps the best rock guitarist on little ol' Earth through his talent and experimentations on his guitar.

And yet, according to Boudaghs, although he livened up both the first ereki (electric guitar) boom in the early 1960s and the Group Sounds period in the latter half of that decade, Terauchi didn't continue on with his rock god status going into the 1970s, instead just letting himself fade down to a relative simmer. But for me, that doesn't sound like a bad way to go...it's almost like the old saying about leaving the stage while keeping the audience wanting more.

I found out that in 1962, Terauchi formed a band called Blue Jeans（ブルージーンズ）and in the beginning, there was a bit more jazz in there including a saxophonist and wood bassist, but gradually it became mostly an ereki band as you can see in the thumbnail. Apparently, according to J-Wiki, there were three different iterations of Blue Jeans going into the 1970s, but the song of note here, "Ame no Omoide" (I'll Remember in the Rain) comes from 1965 during the band's first phase which lasted between that formation year of 1962 and 1966 when Terauchi left Blue Jeans for a while.

Of course, I'm no expert on the intricacies of guitar rock or history of Japanese rock during the 1960s but listening to Takeshi Terauchi & Blue Jeans' instrumental "Ame no Omoide", I do get some of that Ventures vibe and also a feeling of Spanish guitar from a spaghetti western. Plus, it's also interesting to hear that electric piano near the end. Terauchi handled the arrangement while fellow Blue Jeans guitarist Kunihiko Kase（加瀬邦彦）came up with the melody. Kase would later on join the Group Sounds band The Wild Ones and then become a prolific composer/lyricist which includes Kenji Sawada's（沢田研二）hit "TOKIO" in 1980.