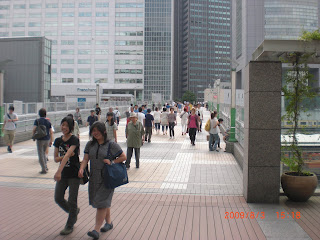 Oh, yes...a nice photo of the south Shinjuku pedestrian bridge as taken from the entrance of Takashimaya Times Square back in August 2009. Simply reading that month has me feeling beads of sweat rolling down my back and forehead; summer is definitely one season not to be trifled with in Tokyo. I recall gulping down a lot of bottles of Max Coffee back then.

To be frankly honest here, I realize that it is City Pop/AOR Friday on "Kayo Kyoku Plus" but I'm not entirely sure that this song by Ikue Sakakibara（榊原郁恵）, "Akirameta hazu na no ni" (I Thought I'd Given Up On You) really applies. Oh, to be sure, the people involved have loved their urban contemporary; we have Akira Ito（伊藤アキラ）on lyrics, Etsuko Yamakawa（山川恵津子）on music and Tetsuji Hayashi（林哲司）taking of the overall arrangement.

Certainly, I can say that Sakakibara herself graduated from the genre of aidoru music going further into the 1980s although I agree that "Akirameta hazu na no ni" is a happy bouncy affair. There is indeed a City Pop-py saxophone solo but overall I think this ultimately comes across as a really cheerful straight pop tune. As the title hints, the song is about realizing that the feelings are still there for that special someone despite some initial relenting but the overall sensation is that of striding gleefully through a park. It just doesn't have to be a city park. The song was a track on Ikue's 15th album "Niji Iro"（虹彩...Rainbow Colours） from June 1983.