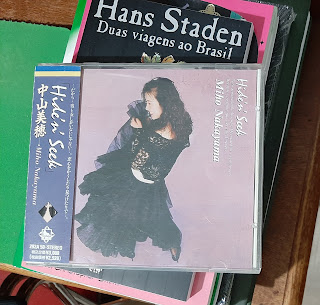 Recently, I’ve been listening a lot to Miho Nakayama’s (中山美穂) “Hide ‘n’ Seek” album, which was released by the charming aidoru in September 1989, and that’s probably because I was finally able to buy a used copy of it here in Brazil – probably lost at someone’s basement, or something like that. Anyway, it was one of the singer’s first albums I listened to more than a decade ago, so it was very nice to have it in my collection after all these years.

Like happened with many aidoru in the late 80s, Nakayama’s works were getting more ambitious and sophisticated with the help from talented producers and songwriters such as Toshiki Kadomatsu (角松敏生) and Cindy. It’s not that in the early 80s famous aidoru stars like Seiko Matsuda (松田聖子) or Naoko Kawai (河合奈保子) were not bestowed with great songs by famous musicians, since we all know they were, but in the mid-to-late 80s – and this probably connects well with the bubble mindset of the time – there was this will to directly adapt trending sounds from the West right into the mainstream Japanese music scene. So, with that in mind, “Hide ‘n’ Seek” seeks (pun not intended) a more Western sound, far from happy-go-lucky aidoru tunes Nakayama released from 1985 to 1987. 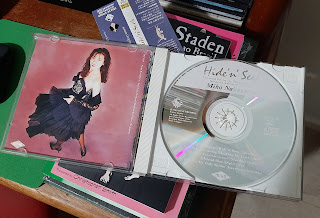 More precisely, though, we can divide it in two halves, like it was probably conceived, since, besides CD and Cassette, it was also released in Vinyl format. The first half of “Hide ‘n’ Seek” is heavier, with a strong New Jack Swing and R&B sound, courtesy of singer-songwriter Cindy, while the second half, focused more on Anri (杏里) and Nakayama herself as the masterminds, is more dance-pop oriented, even though it still maintains the R&B touch. Of course, there are a couple of ballads in there too, like “Endless My First Love” right before “VIRGIN EYES” and a stripped-down version of “You’re My Only Shinin’ Star” closing the album, but I’ll not talk about them in this article, since I don’t think “Endless My First Love” is among Nakayama’s strongest ballads, and this special “Album Version” of “You’re My Only Shinin’ Star” lacks the magnitude of the single’s version, especially in the arrangement.

After an intro called “Party Down”, the album starts for real with the title track, “Hide ‘n’ Seek”, an urban contemporary and New Jack Swing song. Think of Paula Abdul, Janet Jackson or Bobby Brown and you’ll see what type of sound Nakayama was trying to accomplish here. Personally, even though I’m not a New Jack Swing enthusiast, I respect her artistic choice here, since Nakayama really started exploring more intricate R&B/Western sounds in 1988, with the “CATCH THE NITE” album, produced by City Pop legend Toshiki Kadomatsu.

“Destiny”, which follows right after “Hide ‘n’ Seek”, is the other New Jack Swing song from the album, and I like this one better. While I do love Nakayama’s sultry performance, what really gets me every time I listen to “Destiny” is the groovy bass line, which reminds me a lot of some Sonic the Hedgehog music from the Sega Genesis era in the early 90s.

Like I said at the beginning, this second side of the LP explores R&B in a different way than the New Jack Swing from before. Starting off with an “Edit Version” of the dazzling and classy single “VIRGIN EYES” (the horn section is amazing), we follow right into “Stardust Lovers” and its equally engaging groove (I really love how Anri made these two gems connect).

In my mind, “Split Love” have always been “Stardust Lovers” sister track, even though they’re separated by “Island Blue” in the album (another good song that I didn’t select for this article, by the way). Anyway, it’s straightforward post-disco sound just reminds me of something almost futuristic with its spacey keys and the brief yet full of impact instrumental synth breakdown, even though it’s very dated for the same reasons (I can’t tell why, but I always think of Mtume’s “So You Wanna Be A Star” when I listen to “Split Love”). The fact that Nakayama’s vocals are smooth is just a big plus. Well, to be fair, she’s smooth in the whole album, and while she may not be the greatest singer out there, especially in live performances, I truly enjoy her voice in the recordings. Especially in the late 80s/early 90s. 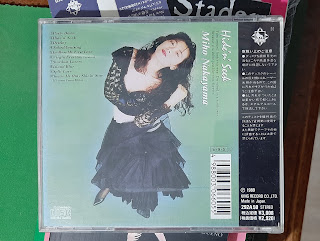