With all the riveting performances on last night's 'Kayo Concert' Mood Kayo fest (GREAT episode by the way, especially to a fan of the genre)... well, as riveting as a bunch of elderly men can pull off, I had a tough time deciding which song to write about. I mean, there were the usual 'Mood Kayo all stars' from the 50's and 60's like the Hawaiian 'Mahina Stars' and the Latin and now reduced to 3 members 'Los Indios' and 'Los Primos', so there was quite a selection. But what took the cake was ex-Toshi Ito and Happy & Blue ( 敏いとうとハッピー＆ブルー) lead singer Hideo Morimoto (森本英世) singing one of the group's 3 big hits, 'Yoseba ii noni'.

Other than the song's pretty dramatic start, another thing I remembered was that I went, "Is that him? The cool guy from Happy & Blue?" And yes, I was quite thrilled by the fact that it was really the man himself looking rather spiffy in a white suit with that little smile on his face. Watching the group's performances in the 70's and early 80's, I always thought that Morimoto just gave them that extra edge they needed due to  his interesting and pleasant vocal delivery... and also he seems to like to move along to the music, making for better stage presence.


The video directly above is to a more recent rendition with new members and a different guy as the lead singer... I think he's Eisaku Tamaru (田丸栄作). Whereas the video above has Morimoto at the helm, as well as some other guy (I think he's one of those guests on the show).

I would have to say that the silliest thing on that episode would have to be Koji Taira (平浩二) in a hard-to-ignore sparkly top that made him look like one of the numerous disco balls on stage. Ah, but that didn't matter since his performance of his hit 'Bus stop' (バス・ストップ) was aMAzing. 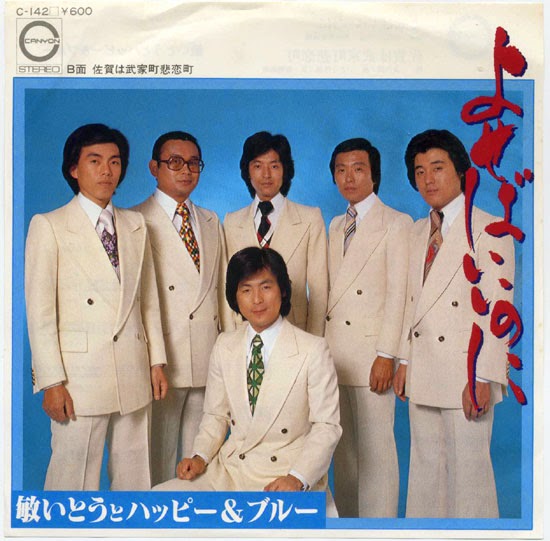