The Works of Tetsuji Hayashi （林哲司） 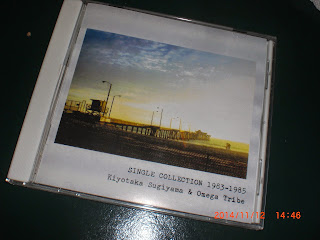 The one definite benefit that I've gotten since starting "Kayo Kyoku Plus" back at the end of January 2012 is that I've been able to notice composers and lyricists a whole lot more. And to a certain extent, I've even been able to discern the styles of some of them.

For example, singer-songwriter Tetsuji Hayashi struck me as being the go-to guy to whip up at least two types of songs: the wistful summery ballad and the happy-go-disco pop song. The Shizuoka-born Hayashi was influenced by American pop music via his older brother, and debuted as a singer-songwriter in his early 20s in 1973 although he wasn't initially all that successful.

However, one of his early compositions was for aidoru Saori Minami（南沙織）. "Ai wa Meguriai kara"（愛はめぐり逢いから...Love Comes From Chance）which was her 21st single from November 1976. I listened to this ballad for the first time today and I could hear the beginnings of his mellow style which has that bit of Carpenters and early Olivia Newton-John. Tomiko Okada（岡田冨美子）was responsible for the lyrics. It peaked at No. 45 on Oricon and was also a track on Minami's BEST album, "Cynthia no Harmony"（シンシアのハーモニー...Cynthia's Harmony）from 1977. Moreover, the song became the theme tune for the TBS drama "Kekkon suru made"（結婚するまで...Until I Get Married）.

As for the happy-go-disco side, there's nothing better than Mariya Takeuchi's（竹内まりや）"September". As much as I love the legendary song of the same title by Earth, Wind & Fire, I also adore Takeuchi's cheerful romp on the sunny side of the street, and it is one of my early happy memories from my adventures into Japanese popular music.

Just a few months after Takeuchi's release of "September", there was another Hayashi composition which would become one of the classics of City Pop, "Mayonaka no Door" （真夜中のドアー）. With Yoshiko Miura（三浦徳子）providing the lyrics, the late singer Miki Matsubara（松原みき）may have exerted a little too much vocal into the recording but every time I hear it, it still takes me back to the time when I was walking through the night time streets of Tokyo as a teenager back in 1981.


One of my very favourite songs from the 80s was also created by Hayashi. "Osaka Bay Blues" from 1982 put the capital 'W' onto wistful as Masaki Ueda（上田正樹）let his emotions seep into the words. The composer has been continuing to create songs well into the new century, but I think it was his time working with lyricist Chinfa Kan（康珍化）during this decade (including this song) that stamped his brand.

And whenever I think of the partnership of Hayashi and Kan, Omega Tribe always pops to mind. To be specific, I think about the incarnation of the band with Kiyotaka Sugiyama（杉山清貴）as the lead vocalist. The songwriters' "Summer Suspicion" from 1983 has just about planted itself in my brain as the theme song for the early Omega Tribe years. Because of the Sugiyama-Hayashi-Kan triumvirate, I'm always gonna imagine white sands and ultramarine sky whenever I hear their songs.


Later in that year, Hayashi came up with another soaring Anri（杏里）classic, "Kanashimi ga Tomaranai"  （悲しみがとまらない）which seemed to time warp in from the late 70s. I think it was a foregone conclusion that Hayashi would pair up with one of the queens of summer kayo, and to this day, the words (again by Kan) "I can't stop the loneliness" and that amazing trumpet solo near the end still make the song a nostalgic great in my books.

Speaking about soaring classics, Akina Nakamori（中森明菜）also benefited from the Hayashi-Kan touch with "Kita Wing" from 1984. Considering what I've already put down on the song in its own article, I just wonder if Hayashi had ever wanted to be an adventure travel writer in another life. His ballads may encourage one to take a walk along the beach and sigh, but when he goes uptempo, it's time to get the swimming trunks and the water skis in gear.


As I said at the top, Tetsuji Hayashi is a singer-songwriter, so he has also released his own singles and albums over the decades. One of his own songs is "Touch Me" from his 4th album, "Nine Stories" (1986), and not surprisingly, he's quite the balladeer. Just judging from the above song, I could almost consider him to be the J-David Foster.

I had a chance to buy his second album from 1977 "Back Mirror" when I was at the Shibuya Tower Records last month, but let the opportunity slide. I'll see if I can get it sometime for Xmas, though. And certainly, I'll be taking a look at some of his many, many compositions for other singers as well. Hayashi has continued to make music up to the present day, but I'll always associate his best stuff with the late 70s and 80s.
Posted by J-Canuck at 5:13 PM