Now this is a real palate cleanser for yours truly! Listening to the various hits of the much-loved 80's aidoru Akina Nakamori (中森明菜) on an episode of 'NHK SONGS' last Saturday night, I came across a few that have been introduced to me via monomane talent Korokke's (コロッケ) crazy shenanigans. The first ever being 'Desire', then subsequently 'Jikai (1984)' when he was a guest on The Drifters' 'Dorifu daibakusho' (ドリフ大爆笑).

The hilarity of seeing Ken Shimura (志村けん) and Korokke in dresses at a cabaret club aside, I had eventually succumbed to the catchy-ness of 'Jikai (1984)'. Like most aidoru songs I know, it's got the synthesizers loud and clear at throughout - something I miss from 80's pop - as well as the electric guitar in the background that makes it all the more cool. Then we have a bouncy Nakamori dancing and twirling away as she sings with that low and powerful (for an aidoru) voice of hers. That really breaks my stereotype of female pop idols singing at a pitch that drives me up the wall, by the way.


Anyway, just like in the title the song was released in July 1984 as Nakamori's 9th single. Written by Masao Urino (売野雅勇) and composed by Masayoshi Takanaka (高中正義), 'Jikai (1984)' recieved half a dozen accolades... literally. Some examples include 'Best broadcasting music award' (I have no idea what kind of award that is, but okay) at the 15th Nihon Kayo taisho and 'Best song Award' at the 13th FNS Music Festival. It did really well on the Oricon charts as well, peaking at 1st place and settling at 6th by the end of the year. And she sang it once at the 35th Kohaku. As expected from a song during her time at the top.

Ah yes, if you want you can check out the silly Drifters clip that I mentioned above in the link.

Huh, I'd always thought my first article on aidoru would be on the new Gosanke's Hideki Saijo (西城秀樹). I guess not. 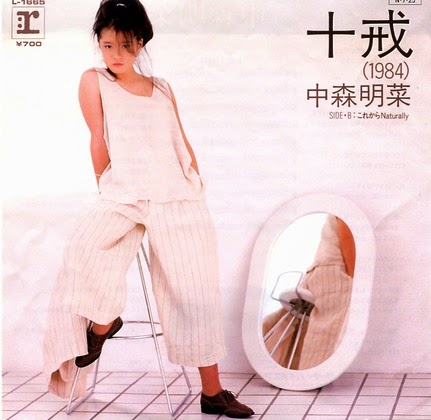 www.auction.co.jp
Posted by Noelle Tham at 7:00 AM