From the way Hiroshi Kadokawa (角川博) looks, I had never imagined such a smooth voice to ever come out of him. When I first laid eyes on the Enka singer - who's been active since the mid 70's - not too long ago, the impression I got was that this severe-looking guy who seems to have a slight frown had one of those husky, gritty voices and sang manly songs... kinda like Ikuzo Yoshi (吉幾三), but without the comedic element.

So I was wrong. And he does have a comedic streak - I saw a snippet of him singing one of Hibari Misora's (美空 ひばり) songs while cross dressing with heavy makeup.

'Yo Naki Dori' is the first song I heard from Kadokawa, and it's also his most recent single released on 21st May 2014. I would say that this is one of those Enka tunes that are easy on the ears for first time Enka-goers as Kadogawa's pleasant singing style is not too radical unlike some others, and the music (by Chiaki Oka (岡千秋)... hey, this guy's name rings a bell!) is quite pleasing to the ears.


If you've noticed, there is a bird mentioned in the title. At first glance it may seem a little weird since the lyrics  (done by Mami Takubo (田久保真見)) portray the typical Enka song: Drinking away at the izakaya - alone of course, while thinking about the one who got away. But according to Kadokawa on an episode of 'Nippon no Uta', the cries of the bird at night (basically, the title) gives you a feel of loneliness. So that's pretty much why Kadokawa says that he's a crying bird... at night... to represent the protagonist's loneliness.

'Yo Naki Dori' did pretty well on the Enka/Kayokyoku Oricon charts, although now I can't seem to check it again to make sure that I'm right. All I remember was that it was floating up and down for a couple of weeks in the Top 20 a couple of months ago. 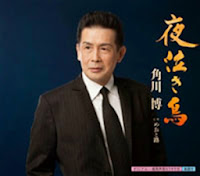