Yosui Inoue (井上陽水) has a strange voice indeed. To me, the guy sounds like he's constantly singing with a Cold - nose all blocked up - and yet it's not bad. In fact I'd say it's quite amusing to listen to, and I got my first full taste of it while listening to his 33rd single, 'Make-up Shadow'.

It was during a view of the Top 30 songs of 1993 that I encountered this strange song. In that video, 'Make-up Shadow' was placed 17th... however in the J-Wiki article on the song, it says that the song peaked at 2nd place on the Oricon weeklies and remained in the Top 30 at 27th by the end of 1993. Now that's annoyingly confusing. You can check out the video below. That year's got some good songs!

But that aside, other than the funky music with acoustic guitar often heard in the noisy background (by Jun Sato (佐藤準)), another thing that piqued my interest during a short snippet of the non-existent full MV on YouTube was seeing Inoue, in his trademark sunglasses, sprawling and almost lounging on a large fallen lipstick sculpture as he sings this song. That's probably one of the funniest things I've seen in such music videos! And then again, I suppose its very Inoue to do something like that. I just managed to find the full music video with the complete dosage of weirdness on Dailymotion, you can check it out here.

Already having 'Make-up Shadow' as the name of a song is pretty strange, to put it bluntly. Unique would be a better word for it, perhaps? So to sort of match that, we have Inoue's lyrics. I have a vague understanding of it, but I'm a 100% sure it's not a song that names the different types of cosmetics. It seems to say something about entering the real world once you put on make-up and... uh... living the good life once you make it out there? I don't know, there's a line saying that the person has 2 panthers by the names of Ruby and Sapphire so I assume she struck gold. Hmm, regular J-pop songs are so much more difficult to decipher than Enka songs.

'Make-up Shadow' was used as the theme song for one of those Thursday dramas on Fuji TV from 1993 called 'Subarashi kikana jinsei' (素晴らしきかな人生), as well as the commercial jingle for a Toyota car in 2006. 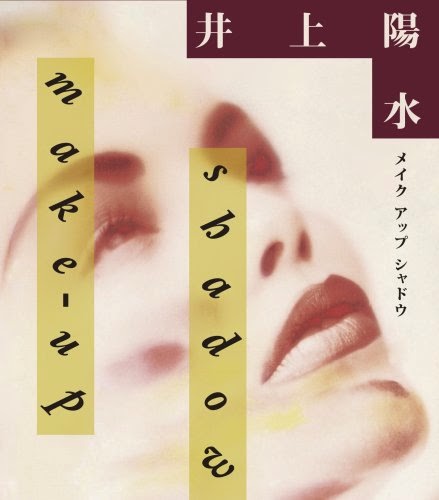