Only if love were indeed easy, but that is about as far as I go in terms of philosophizing that concept. Still, despite that tiny difference in opinion with singer-songwriter Akiko Kobayashi（小林明子）, I think her song "Love Is Easy" goes down like that calming cup of chamomile with cream (yes, I do like my alliteration). It's one of the tracks I remember well from her 3rd album, "Naturally" which came out in September 1987.

One of the reasons that it has stuck so well in my mind even though I bought the audiotape well over a quarter-century ago is because of that ol' American country music arrangement. I mean, if Kobayashi had written English lyrics for it, this could have been given to Crystal Gayle. However, the singer herself does her usual fine job with it, and "Love Is Easy" is quite the tonic for her fans after a tough day (had a few mini-crises to stamp out over the past couple of days).

I also have another track from the album that I've covered..."Helpless". 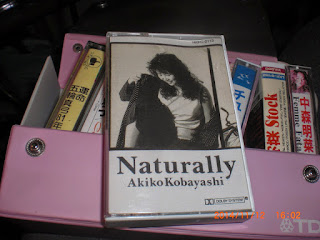