Yuki Tokunaga (徳永ゆうき) is the guy who had introduced me to one of Michiya Mihashi's (三橋美智也) many hits, "Hoshikuzu no Machi" (星屑の町) (profiled), during an enjoyable "Kayo Concert" last year. Besides his really distinctive warbling that has a slight semblance to the veteran enka singer, I noticed how young Tokunaga was in comparison to the old song he sang, and how youthful he looked when next to the other guests on that Tuesday night - Mae-Kiyo, Ikuzo Yoshi (吉幾三), etc. Some research afterwards, I found out that he had made only his debut just 2 years ago in 2013, a year after becoming the "Nodojiman" grand champion, and that this Osaka native is only 2 years older than I am. Well that explains his youthful appearance.

Anyway, "Yume Sagashi ni Yuko" is Tokunaga's 2nd official single, released on 8th April 2015, and I had seen it once within the Top 20 in the Enka-yo charts in the week after its release (peaked at 52nd place on the regular charts). I happened to find its MV just after watching Hiroshi Itsuki's "Nagisa no Onna" (渚の女) on Dailymotion, which sadly made me want to take out my eyeballs for a wash in saline - I just found it so uncomfortable to watch him in that role at this day and age. And so my equivalent of the saline wash was Tokunaga's "Yume Sagashi ni Yuko", which was thankfully simple and innocent; the song is about our main man here setting out to find and realise his dreams, and Haku Ide's (いではく) lyrics narrate his journeys along the way. It was composed by Mamoru Miyagi (ミヤギマモル), and the first thing that comes to my mind when hearing it is, "Let's go on an adventure!" possibly influenced by seeing Tokunaga with a backpack and a newsboy cap sitting squarely on his head in the video.

You can check out the full MV here... And you can also go to the uploader's channel to view Itsuki's MV if you want to, he uploads a number of full MVs of new enka songs, and for that I am grateful. 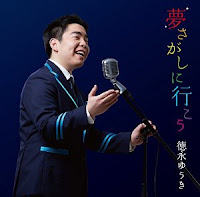