Well, ring-a-ding-ding to you folks!

I'm pretty convinced that the famed theme song for the anime "Lupin The 3rd" is one of those rare creations that cannot be ruined no matter what the arrangement (although I may grow a bit antsy at a heavy metal version).

And happily that record has held thanks to the man who created the song, Yuji Ohno（大野雄二）, and his jazz group of the Lupintic Five with an updated version of "Lupin The 3rd". This take was a track on the May 2011 album "Yuji Ohno & Lupintic Five: Let's Dance", and it has a swinging 1960s jazz arrangement that would get the attention of Austin Powers and Don Draper. Brylcreem and martinis for all!

But what makes the song really sing here is the sexy and sultry vocals of Yoshie Nakano（中納良恵）from Ego-Wrappin'. She isn't merely singing to the audience but seducing it like a Japanese Brigitte Bardot for most of the song while unleashing her full volume at certain parts.


The above has Ohno and the Five performing that same song, although without Nakano. It's a more standard but no less cool version.

Just in the last couple of months, Toronto has had a couple of visitations by Japanese pop artists: Babymetal and the lead singer of Kome Kome Club（米米クラブ）, Tatsuya Ishii (although I'm not sure whether the latter came to sing specifically) just down the street from my place at the Japanese-Canadian Cultural Centre. It's a pity that I missed them but if I ever hear of a one-night performance by Nakano somewhere in my burg, I am grabbing that ticket! 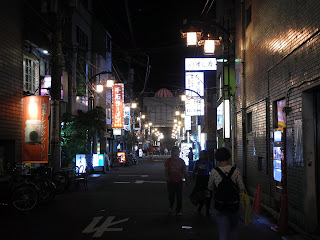