Hope all of you folks are enjoying a happy Father's Day whether you are receiving or giving the accolades today. Took my parents out for Sunday breakfast at a local branch of The Sunset Grill and I'll be grilling up steaks later tonight. In the meantime, I have time to devote to our beloved blog.

A few days ago, I discovered this sweet adorable song by singer-songwriter Senri Oe（大江千里）on YouTube. Actually, the video was of Oe and Mari Iijima（飯島真理）doing a joint performance of the song on a TV program back in the early 80s with Nobuyuki Shimizu's（清水信之）soulful electric guitar helping out. But the above video is for the original recorded song, "Girlfriend", which came out as Oe's 2nd single in August 1983. Written and composed by the singer, EPO is helping out in the refrain as Oe sings about that high school girl he craves. Hearing how the song goes, I could imagine high school student Oe staring and daydreaming about his object of affection surrounded in sparkles and fluffy clouds...before the teacher comes by and whacks him with the ruler. It's a pie-in-the-sky melody that would fit a fine sunny Sunday which it is today...nice way to start the summer.

There is that video of Oe and Iijima below. I like Shimizu's arrangement (and his apparent prowess in cloning himself) but I prefer EPO as the backup.


(the video has been taken down) 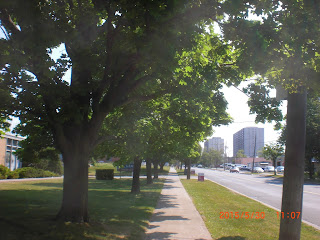