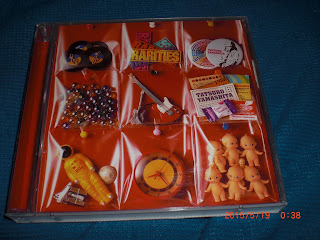 I bought Tatsuro Yamashita's（山下達郎）"Rarities" from 2002 about a decade ago although it wasn't at the time when it was first sold. One of the tracks happened to be the instrumental version of his 30th single, "Heron" which originally came out in January 1998.


"Heron" was one of Yamashita's songs that I hadn't gotten to know all that well despite the fact that it did show up a fair bit on TV through excerpts from a pretty bizarre music video by my recollection, and its use in a Kirin Beer commercial. It was in the Tats playbook of lush guitar and balladeer vocals that I have enjoyed but still, I never got around to acquiring it until I got "Rarities".

Despite its release in the late 1990s, it was meant to have been made for a morning TV program in the early 90s, but for whatever reason, the orchestra which was supposed to have helped in the recording couldn't really come to grips with it, and so Yamashita left it on the back burner for a few years. However, it finally got recorded just in time for Kirin Beer to take advantage of the 1998 Nagano Olympics. The above, by the way, was according to the J-Wiki article on "Heron" which based some of its information on an interview with the singer-songwriter for a Shinseido free booklet called "pause".

The one question I had was with the title. Why "Heron"? I reasonably assumed that it was because of the Japanese love for the lanky but svelte bird. I couldn't glean a direct answer from the J-Wiki article except that Yamashita had found the definition for the heron in a dictionary which included the statement that it was a morning-themed bird that supposedly brought rain whenever it cried out. I think the author for the definition was being more philosophical than factual, but Yamashita focused on that point and incorporated that idea into the lyrics. They were of the inspirational type of always going forward and knowing that there will always be someone having your back with the singer begging the titular heron not to cry out so that the rain will not come to ruin things.

"Heron" peaked at No. 10 and went Platinum, gradually becoming the 98th-ranked single for 1998. I finally got the original version when I purchased Yamashita's "OPUS: All-Time Best 1975-2012", but as I said at the top, "Rarities" has the guitar instrumental version. Apparently, he made that version since he had gotten asked if he could supply something that could play as pleasant BGM during the weather and traffic reports....while drinking Kirin Beer.
Posted by J-Canuck at 9:52 PM