I think Teresa Teng's（テレサ・テン）2nd single, "Kuukou" (Airport), is filled with that sentiment. Originally released in July 1974, when I heard the song performed being performed by singers Kanji Ishimaru and Miyuki Hatakeyama on this past week's "Kayo Concert", that amazing trumpet that started things off jogged the old memory synapses. Yep, I've heard this one over the years whether it be through audiotape and old VHS tapes. I hadn't known who the original singer was, though.

Kosho Inomata（猪俣公章）was responsible for the bittersweet and classic melody and Michio Yamagami（山上路夫）took care of the lyrics about making those final goodbyes at the airport suffused with all of those feelings of "We'll always have Paris" and "Here's lookin' at you, kid". Listening to "Kuukou", I think it's kayo like these that give an extra meaning to the word "terminal" aside from it meaning an airport building. Then there are Teng's vocals which carry those tender, delicate and heartbroken emotions as she reflects that person who has to see off her lover one last time from the observation deck as he heads off for his hometown and his wife.


Just makes me want to get that drink at the terminal bar. Heck, I've got so many options now that Haneda Airport is chock-filled with places. Still, I'm not sure whether there is a drinking establishment over there facing outside which would capture the ambiance of "Kuukou". In any case, the song peaked at No. 29 on Oricon and earned Teng a Best Newcomer Prize at the Japan Record Awards for that year. I think the trumpet player should have also gotten a little something for that performance. 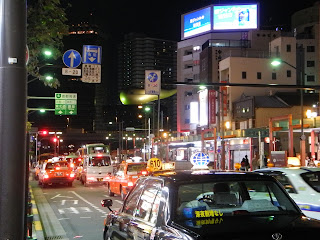