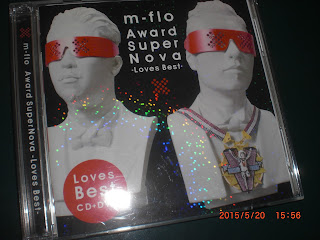 Oooh...it's so sparkly! Yup, I did pick up m-flo's "Award Super Nova - Loves Best" album with accompanying DVD back in the day since I kept seeing those catchy videos by the duo on Space Shower TV back in Japan.


And one of those m-flo videos was for "Lotta Love" which actually had come out a couple of years earlier on "m-flo inside - WORKS BEST II" in 2006. I have to say that the video does stand out at how these kids could bust a move (while I risk busting a hip just walking the wrong way) , almost terrifyingly so. They were some pretty talented students, some of whom can probably enter real clubs legally now.


The song was performed by m-flo and MINMI, an Osaka singer of hip-hop and reggae. One of the things about m-flo's "LOVE" collaborations is that although the duo has worked with people that I have known such as Bonnie Pink and Akiko Wada, I've also gotten to hear singers that I probably would have never have gotten a chance to hear such as MINMI, Emyli and Emi Hinouchi（日之内エミ）. Although I'm not really big into hip-hop, it's been nice to listen to some of these collaborations that are very different from what I usually put on the player.


However, it's not the first time I've heard a song under the title of "Lotta Love". My first love for "Lotta Love" will always be with Nicolette Larson's urban 70s classic written by Neil Young.

Email ThisBlogThis!Share to TwitterShare to FacebookShare to Pinterest
Labels: 2006, J-R and B, m-flo, Minmi, Single