I really find it interesting that I immediately took a very strong liking to "Neon Bune" at first listen. It even made Ike-Teru one of my Top 6 favourite enka singers (his other songs contributed to that as well)! He's not within the Top 3 though, and if you've been paying attention, you'd probably know who are occupying those spots already.

Anyway, I had taken note of this quintessentially enka song when I read J-Canuck's article on it, but since I had no idea who Teruo Ikeda (池田輝郎) is, it did not cross my mind to play that song. However, on an episode of "Nippon no Uta" early this year - it's originally supposed to be on TV last year if I'm not wrong, but the NHK channel here is quite behind schedule - he was one of the 3 to perform on the "Kayo HOT Zensen" corner since "Neon Bune" did well on the regular charts (peaked at 24th place) Enka-yo charts, and I couldn't stop listening to it since. I can safely say that it's currently one of my most-listened-to enka songs, besides the multiple covers of and the original "Tabi Sugata Sannin Otoko" (旅姿三人男) and Yoshio Tabata's (田端義夫) "Otone Tsukiyo" (大利根月夜), just to name a few.

As to why I am amused by this, it's because I'm actually not a particular fan of this type of enka with a heavy atmosphere, I'd usually go for the more cheery, jaunty sort. And if the tune is sung by someone with the type nasally warbling used by Ikeda and some others like Hachiro Kasuga (春日八郎), it'd take a while for me to accept it. So "Neon Bune" was a surprisingly rare exception. The full MV is on Dailymotion, you can check it out here.

Just like J-Canuck mentioned in his article, this song, though only released in 2014, sounds like it came from way back in the 70's, especially in terms of its music. Composed by Hideo Mizumori (水森英夫), what I like about the refined score is that it has some rather dramatic bits throughout. I seem to enjoy listening to "Neon Bune" most after tiring school days, it makes me imagine a white collar worker, probably more worn out than I am, drinking away at a quiet bar - it's too refined for me to picture a gruff fisherman after a tough day at work. Hmm, I should put listening to "Neon Bune" at an izakaya when I return to Japan as a new item on my bucket list. 2 items have already been crossed out: looking at moose, and gawking at American bison (at the Munich Zoo)... They are so BIG. Doesn't sound like much, but those are a couple of my favourite animals and they don't have them in Singapore - most likely too hot.

Moving on, Toshiya Niitani (仁井谷俊也) penned the lyrics to "Neon Bune", and they have Ike-Teru singing about our lead here drinking away his problems e.g. missing home, probably also missing the woman he loves, y'know, just some of the usual enka stuff.


Here's a video of Ike-Teru talking about his 8th single, and he even gives tips on how to sing it during a karaoke session, although I really didn't get that... or about half of what he's saying. 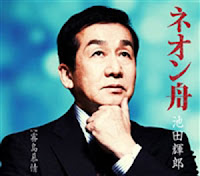