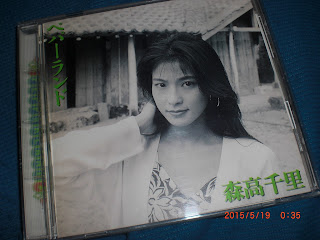 During the early 90s when I was living in Toronto, I decided to pick up Chisato Moritaka's（森高千里）7th album, "Pepperland"（ペパーランド）from November 1992 via "Eye-Ai" money order. I was rather intrigued by the cover since it had the lovely Moritaka just wearing regular clothes instead of the star-spangled pseudo-military outfits we were accustomed to seeing her wearing on stage and on past CD covers. Plus, the cover for "Pepperland" itself was drained of any colour. I was wondering whether if this signified a new direction for the singer-lyricist.

Sure enough, there wasn't any of the bubblegum techno synths or the sampling. The music, much of it provided by Moritaka herself on guitar, piano, bass and drums, seemed like straight-ahead pop with an older flavour.


Case in point, one of the tracks from the album is "Gokigen na Asa" (A Merry Morning) which was composed by Hideo Saito（斉藤英夫）. It launches with a riff that sounds a little like the intro for the original "Venus" by Shocking Blue but instead of speaking about a hot girl who's got it, Moritaka's lyrics features a whole lot more innocence in this girl who is so giddy about her very first date that she couldn't sleep the night before and insists on making breakfast to bleed off some of her nervous energy. It's a cute song but not the same kind of cute from her earlier stuff as a techno aidoru. It's more of a down-to-earth, girl-next-door cute. The above version in the video has a slightly different arrangement but basically the sound is there intact.

Considering that older, somewhat more acoustic sound of the album, I had initially thought that the title "Pepperland" was somehow connected to The Beatles (Sgt. Pepper's and all that). But as it turned out, according to J-Wiki, the title referred to the name of a live house in Kumamoto Prefecture that she had performed in as part of her old band. Also, another point is that there were no singles issued from this album. I think for Chisato fans, "Pepperland" was a turning point for their heroine's music.
Posted by J-Canuck at 11:22 PM