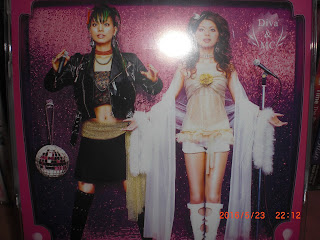 The turn of the century in Japanese pop music was the period when Japanese R&B started coming into the fore. Folks like Hikaru Utada (at least, initially), Misia, m-flo and SOUL'd OUT were bringing this new wave in but then I saw and heard some of these other acts such as Heartsdales and then the target of this article today, Bennie K.

From what I've read about Bennie K's origins on Wikipedia, there is a sense that fate had a very strong hand here. The duo of Yuki and Cico were both born in Osaka and have the same family name of Yamamoto (common, though it is), and yet they were not related at all and Yuki soon left Osaka to be raised in Saga Prefecture in Kyushu. Their chance meeting happened one day while Yuki was doing a high school homestay in Los Angeles at Cico's aunt's house. Becoming fast friends during their time together in California, the homestay eventually ran its course with the two separating (but I'm assuming that they kept in touch) and pursuing their own music careers, only to meet up again and collaborate at a Christmas event. From then on, they were inseparable.


The process of gaining their group name of Bennie K was also quite interesting and I'll leave that up to you to look up at their Wikipedia entry. In any case, my first exposure to Yuki and Cico was through "Sunrise" which was actually their 8th single from September 2004, more than 3.5 years following their debut with "Melody".

Listening to "Sunrise" and watching the music video, the song which was created by Bennie K and Mine-Chang sounded like a tune that The B-52s hadn't sung or arranged. And since I was a big fan of that group's "Roam", I also liked "Sunrise" with the added rapping. The role allocation was interesting to see as well with Yuki being the singer and Cico the rapper...and man, could Cico rap at the speed of sound.

There was one other Bennie K song after "Sunrise" that I had seen on the music channels but other than that, I don't know much about what had happened before and what has been going on with them since. However, hearing the high-energy "Sunrise" for some months was enough for me to grab their CD single.
Posted by J-Canuck at 2:24 PM

Email ThisBlogThis!Share to TwitterShare to FacebookShare to Pinterest
Labels: 2004, Bennie K, J-R and B, Single