OK....in perfect honesty, Haruomi Hosono（細野晴臣）has never had the prettiest of voices. "Tokyo Shyness Boy" doesn't break that streak in "Kayo Kyoku Plus". But with my usual random foray into the wilds of YouTube especially when I threw in that "Japanese City Pop" into the search engine, this is what I found.

"Tokyo Shyness Boy" is a track from Hosono's 3rd studio album from 1976, "Bon Voyage co."（泰安洋行）. And I will give my regards to Wikipedia and provide the direct description of the album:

This album continues the tropical style of Hosono House and Tropical Dandy (which would continue later on with Paraiso) while showing influence from the music of New Orleans and also features performances from Tin Pan Alley and Happy End (excluding Takashi Matsumoto. The album's Japanese title was influenced by a Nagasaki convenience store of the same name that Hosono met while on Tin Pan Alley's "First & Last Concert Tour". This album was re-issued as part of a box set with the single version of the Tropical Dandy song "Peking Duck" (which was coupled with a song from this album) and an interview Hosono gave on a Tokyo Broadcasting System radio show.

(the introduction from "Bon Voyage co." on Wikipedia)

I've seen the album of the cover in the book "Japanese City Pop", and I think listening to even this one track, it's pretty interesting since I know that Hosono would become one of the big three in the totally different Yellow Magic Orchestra. He may not have a great voice but I have been interested in his discography pre-YMO.

"Tokyo Shyness Boy" has that City Pop edge since I can't help but feel that this would be something which I could hear in some sort of live house in Shinjuku or Harajuku of the 1970s. Plus the fact that this can never be identified as anything conventionally Japanese puts this squarely into New Music territory. There is that down-and-dirty brass sound in there which reminded me of the house band on the various incarnations of "Saturday Night Live" over the decades.

One other piece of trivia about "Tokyo Shyness Boy" is that Hosono whipped this up as a bit of a tease against Keiichi Suzuki（鈴木慶一）of the Moonriders. Apparently, Suzuki was the type of person who would blush at the drop of a hat. As for "Bon Voyage, co.", it made it as high up as No. 76 on Oricon. 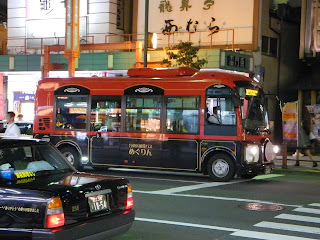 P.S. There was quite the lineup of musicians on the album: old Happy End bandmates Shigeru Suzuki and Eiichi Ohtaki (guitar and backing vocals respectively), Akiko Yano (piano), Taeko Ohnuki (backing vocals) and Hiroshi Sato (piano and clarinet) among others.
Posted by J-Canuck at 10:47 PM