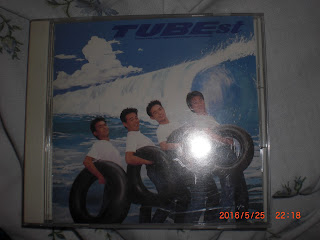 Gotta admit that the title is cute and clever. Well, summer is indeed here and it has become a "Kayo Kyoku Plus" tradition to bring in a TUBE song to herald the hot season. I had actually thought about writing about one of their many singles when I figured that it has been a while since I brought in a BEST article so here is "TUBEst". Released in December 1989 (I guess the boys are not lacking in irony with that release date), it was the band's very first BEST compilation.

As for the asterisked entries finishing up the album, they are actually the products of the Nagisa no All Stars（渚のオールスターズ）, an informal summery supergroup consisting of TUBE, two of their songwriting contributors Tetsuro Oda and Tomoko Aran（織田哲郎・亜蘭知子）, and a whole bunch of other musicians. I will take care of those songs in another article but "Be My Venus" has already been covered.


"Sentimental ni Kubittake" (Sentimentally Head Over Heels) was the band's 2nd single from October 1985 when they were still known as The Tube. As with their debut entry, "Best Seller Summer", the song had more of a 1950s rock-boppy beat along the lines of early 1980s acts such as The Chanels or The Checkers, although lead vocal Nobuteru Maeda's（前田亘輝）delivery was already in there. It was created by the same duo behind "Best Seller Summer", Kisaburo Suzuki and Yoshiko Miura（鈴木キサブロー・三浦徳子）. It peaked at No. 64 on Oricon and is also a track on The Tube's 2nd album, "Off Shore Dreamin'" which got as high as No. 62 on the LP charts.

As for the lyrics....just like a lot of TUBE songs, they all have to do with frolicking on the beach!

"Because I Love You" was TUBE's 4th single from September 1986 and their first ballad out as a single. It makes for a nice sunset song for the young lovers just walking on the beach. Written by Tomoko Aran and composed by Daiko Nagato and Masatoshi Nishimura（長戸大幸・西村麻聡）, it peaked at No. 13 and was the 78th-ranked single of the year. It is also available on TUBE's 4th original album, "Boys on the Beach".


Then there is the even better ballad "Remember Me" although it's much more bittersweet since it deals with reminiscing over a past romance. TUBE's 8th single from December 1988, that piano intro reminded me of an old Boz Scaggs tune. This was Maeda's first foray into writing lyrics for an official TUBE single while Seiichiro Kuribayashi（栗林誠一郎）took care of the music. "Remember Me" jumped up to No. 12, and I think as long as the young lovers don't listen to the lyrics too hard, it should also still make for good strolling-along-the-beach-at-dusk music. It belonged to TUBE's 8th original album as the title track.

Back to some fun in the sun with "Summer City", the song that triggered me to write about TUBE today. I was surprised to realize that I had yet to write about this one into the blog considering that I enjoyed the song after it came out in June 1989, about a couple of months before my arrival in Japan for the JET Programme. That intro which was the musical equivalent of a bunch of delirious surfer dudes racing to be the first one into the ocean before Maeda yells out "SUMMER CITY!" could be the clarion call for all to hit the beaches. Maeda took care of both words and music with this single which peaked at No. 11 and ended up as the 87th-ranked single of the year. It was also the title track for TUBE's 9th album which came out just a few weeks after the release of the single. The album itself topped out at No. 6 and was the 59th-ranked album of the year.

"TUBEst" itself peaked at No. 5 and became the 75th-ranked album for 1990, going Double Platinum and selling over 600,000 copies. And the good times would still keep going for TUBE with 5 more BEST albums into the 21st century.
Posted by J-Canuck at 3:47 PM