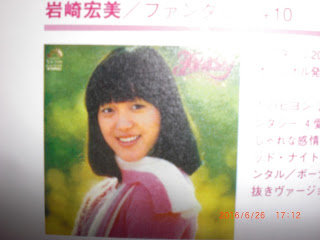 It's about time to put up an Author's Picks list as far as chanteuse Hiromi Iwasaki（岩崎宏美）is concerned. She was one of the pillars responsible for me finally falling for kayo kyoku, and if Seiko Matsuda's（松田聖子）and Akina Nakamori's（中森明菜）lists are already up here, then Hiromi has to be up pronto. Back in 1981, when I first started discovering this group of young singers whose work strangely hit my heart despite me not really understanding the lingo at the time, I saw Seiko-chan and Naoko Kawai（河合奈保子）as the cute teenyboppers but at the same time, Hiromi struck me as being the classy and more mature older sister songstress with that musical-level voice, not knowing at the time about her own time as an aidoru of the 1970s. Therefore, perhaps not surprisingly, my list reflects her 80s material for the most part.

Admittedly, this is a bit of a left-field choice and it was never used in an official single, but I still love this track from her 1986 album "Wagamama"（わがまま）. And as I mentioned in the article for this album, none of the tracks except for one have representation as a video online, and this song isn't it. Still, I felt like I needed to put this one up although there is only the Tower Records link (Track 1) to provide that 45-second excerpt, and even those three-quarters of a minute amply show how she can lovingly caress the lyrics for this jazz torch ballad. I can't really imagine Hiromi scatting like Ella Fitzgerald but she can do some lovely jazz love songs. The excerpt doesn't include the instrumental bridge but even her humming there can make my hair stand up (sorry, I'm being very biased here :)).

This is my lone 1970s entry for the list but "Cinderella Honeymoon" takes the cake for that nostalgic disco arrangement and revealing to me that Hiromi did actually boogie it up in front of the camera before she entered that phase as the romantic balladeer. Her 14th single has that mix of disco, drama and triumph, and it just seems to be that song fit for a singer who sings in a lower register. I wonder if Akina ever covered it, then.

A nostalgic favourite especially since it was the first 45" single that I ever got of the singer. Actually, it was my brother who got it for me after his own Japanese language school graduation trip in 1982, a year after mine (he never caught the Japanophile bug that I did). Even back then, playing it on the original Victor stereo, I could appreciate the violins and that electric guitar accompanying that accomplished voice of hers.

I may have discovered recently that this Hiromi hit was actually a cover version but I still think she owns "Sumire Iro no Namida". This is the song that introduced me to her and got me lifted onto the Hiromi bandwagon. I've really yet to get off. That video above of her performing one of her most famous songs on that episode of "The Top 10" was an example of the many performances of her I saw on old VHS at my classmate's house soon after returning from Japan in 1981. I remarked at the top that I saw Hiromi as the grown-up older sister compared to the 80s aidorus; well, that image of her in the long ojo-san hair and long dress will always be the default image I will have of her.

If it hadn't been for this classic, "Sumire Iro no Namida" would have been on the top easily. However, there is something about how "Ieji" launches with that electric guitar and then proceeds with that drama and elegance which makes it my No. 1. It was used as one of the several ending themes for the suspense anthology series "Kayo Suspense Gekijo"（歌謡サスペンス劇場）, and it was perfect for that, but even listening to it on its own had me thinking of taking an especially intense walk through the park while deep in contemplation....and risking running into a light pole or something. This could have been the ideal commuting ballad for those middle-aged folks at the section chief level in a company. Time to hit the scotch on the rocks.

Come to think of it, I do have mostly ballads in here. Hiromi has performed some fine uptempo material in her career but I can't help but think of her as having been the master (or mistress) of that lovingly-crafted pop ballad. She just has the voice for it.
Posted by J-Canuck at 9:56 PM