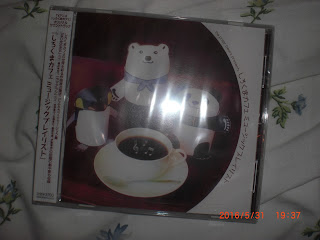 For one of my articles on the many theme songs in the anime "Shirokuma Cafe"（しろくまカフェ...Polar Bear Cafe）, I started to write half-jokingly that the way things were going, I would end up making the show its own category on the blog. Well, it's no joke anymore. I've actually upgraded one of my favourite shows to Labels status. Considering the three opening themes and the myriad of ending themes during its year (2012-2013), I figured it was going to happen. And the last straw was when I purchased the actual soundtrack for the show by Fukuoka-born composer Kenji Kondo（近藤研二）.


Compared to the tons of regular pop CDs I've bought over the years, soundtracks have been more in the minority and anime soundtracks are even fewer on my shelves. So "Shirokuma Cafe Music Playlist" is pretty special to me. I thought the background music accompanying the overall slice-of-life mellowness was just perfect with its mix of whimsical pop and light jazz...perhaps something along the lines of that clarinet jazz which got interspersed between scenes of "Cheers", the classic US sitcom that I associate "Shirokuma Cafe" most with.

The 53-track disc starts with the TV cuts of the first two opening themes "Boku ni Invitation"（ボクにインビテーション）by JP and "Rough & Laugh" by Clammbon. Then comes the overall instrumental theme for the show, appropriately named "Shirokuma Cafe Eigyochuu"（しろくまカフェ営業中...Shirokuma Cafe Open For Business）. It's not an epic welcome on the order of "Be Our Guest" on "Beauty & The Beast" but a cute little old-style jazz number illustrating the usual day in the life of the place where every animal and human know your name. Shirokuma is your congenial host with Sasako kindly guiding you to your table and taking your order. Meanwhile, Panda, Penguin, Llama and the rest of the gang banter on while trying not to fall into Shirokuma's pun trap.


Of course, if you are looking for the harder stuff, then a trip to The Grizzly is in order. "Grizzly's Bar" has so much of a Southern Comfort sort of feeling that the track ought to be served in a tumbler on the rocks. I can even imagine gruff Grizzly smoothly narrating the lines of a Dodge Ram commercial while this song is playing. 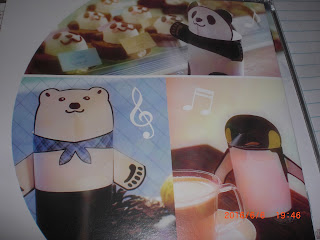 I've used this clip before but it's the eyecatch number in the first few seconds that I wanted to focus on here since it is also one of the short-but-sweet but memorable pieces of music that is also on the soundtrack. In a way, the vaudevillian nature of the number reminds me of the stuff that bands used to play about a century ago to play some act on or off the stage.


But as fellow fans of "Shirokuma Cafe" already know, the music wasn't always in the comical jazz category. There were also some wistful pieces such as "Oyasumi, Arigato"（おやすみ、ありがとう...Good Night, Thank You）which was used during some of the quieter and more introspective scenes including the above montage of Shirokuma and Grizzly getting to know each other as cubs. It was one of my favourite numbers.


"Panda wa Yawaraka ni Sasa wo Hami"（パンダはやわらかに笹を食み...Panda Chews The Bamboo Softly）was the very sad song played on THAT episode. The fans know....Episode 44 when Panda went into a major downward spiral on the news that his friend and zoomate, Jougin Panda（常勤パンダ...Full-Time Panda）, was suddenly transferred to Singapore. This was truly the one dramatic episode on the series that had folks grabbing for the Kleenex or a nearby bamboo leaf. If there had been a promotion for this episode on prime time American TV, it would have had a basso profundo announcer's voice going "And on a very special episode of Shirokuma Cafe....". I have gone through the show twice now but have only seen Episode 44 once....just not ready to see it again....excuse me, I've got something in my eye...

I tried to search for any information about the making of 44 but the only tidbit that I could find was that the episode was something made solely for the anime and was never in the original manga. I got the information from the "TV Tropes" entry for "Shirokuma Cafe" under the heading of "Pragmatic Adaptation".


I read one YouTube commenter stating that he couldn't find the slightly jazzier version of "Shirokuma Cafe Eigyochuu". Well, here it is..."Shirokuma Cafe Junbichuu"（しろくまカフェ準備中）. As with any other real-life cafe sign, I would have translated it as Shirokuma Cafe Getting Ready but considering that the piece was always used during the post-credits "Next Episode" sequence, I would probably say that Shirokuma Cafe Stay Tuned is the more appropriate way to title it. In any case, I always looked forward to this part of the show since the main characters enjoyed throwing around the shtick while on location somewhere in Japan. I rather wonder whether the anime producers and directors had watched early American variety shows for research.

Unfortunately, I couldn't find any video containing the track of Penguin falling in love which has these soaring jazzy violins at the climax but perhaps someday. In any case, there are a couple of vocal tracks from the album that I will have to cover at a future date. But for those folks who continue to enjoy "Shirokuma Cafe" on sites like Crunchyroll or on their own DVDs, I can recommend "Shirokuma Cafe Music Playlist". 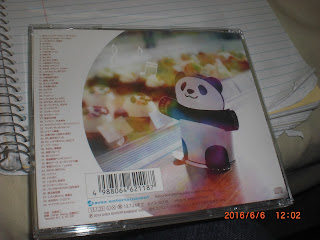