I'm back! Over the past few days I had been vacationing in Japan with the family - Hokkaido and Tokyo - and it was one heck of a trip, I can tell you that. Somehow, I managed to strike off every single thing on my to do list, even those that were a bit of a touch and go sort of thing as they needed either huge amounts of luck or confidence on my part. And so, I'll be deviating from my usual articles to I've share my experiences with you guys. I hope you don't mind and hope you enjoy it. 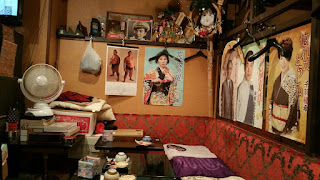 The first experience that I would like to talk about in this article is tackling a popular pastime of the locals there: Karaoke. This was the one item on the list that required my confidence and a little luck. But I wasn't going to settle for any old place like the every present Karaoke Kan, I wanted to find a little joint where the only songs sung are enka and kayokyoku, and the clientele are people over 55. Eventually I did find one while exploring Jizodori in the wonderful Sugamo, a.k.a. Old People Harajuku, called, Mukashi no Uta no Mise, that was opposite the famous red underwear shop. With it's menu promising drinks, snacks, nostalgia, old singers, and old movies, I had to go in - after convincing Mom. 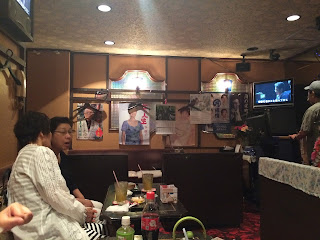 The bar was exactly as I had hoped: small but cozy, dimly lit, a karaoke station in the back, signed posters of mostly unknown enka singers, less than ten regulars, who were surprisingly good singers, sitting around. I was the youngest. Whoopee! I was game to show them what I got and sort-of did so in five tunes - most fun I ever had. All the songs mentioned in this article have been profiled.

I began with "Hakone Hachiri no Hanjiro". I knew it won't really impress as it's by Kiyoshi Hikawa and for someone my age a tune by him would be the obvious choice, but with this being my first ever karaoke session, not to mention in front of an audience, I needed a song I was most comfortable with. Even so, when the time came I couldn't stop shaking and there a couple of times when I when a bit off-key due to some internal panic. I managed to pull through, and boy, that adrenaline rush afterwards! My audience seemed to have given me their seal of approval.

Next up, fueled by adrenaline, I picked the song that I was personally most proud of, "Soshite Kobe". I thought I would have no problems and the oldies seemed to be mildly taken aback by me choosing this classic. To a certain extent, it was better than my first attempt, but I wasn't very satisfied with it. In fact, I was disappointed that I couldn't bring out the angst this tune needs. I guess I wasn't feeling it that day. Would also have been a bit better if it were of a slightly higher key. The audience seemed impressed by my ability to imitate Mae-Kiyo's vibrato.

I surprised myself with song no.3. I had wanted to go with Ikuzo Yoshi's "Kadode" but changed it to one of my top enka favourites, "Hoshikuzu no Machi". I was a bit worried as to whether the oldies would accept how I handled this hit, until their rousing applause and exclamations upon finding out that the "Ojou-san" was going to attempt something by the Michiya Mihashi hit my ears, which really gave my confidence a boost. This was the choice I was most pleased and satisfied with.

You know those times when you go, "What on earth did I just do?" That was exactly what went through my head when I was about to sing my 4th song. Riding on the radiating approval I got from "Hoshikuzu no Machi", my daft mind thought it'd be a good idea to follow up with something "even better" by someone who was in the same league as Michi: "Yuki no Wataridori". As expected the folks cheered in approval at my choice, but I couldn't say the same thing for myself. Luckily, I managed to pull it of relatively okay, going off-key once and the oldies said I did good despite it being a challenging song. I clearly remember what I said afterwards, "This song is really difficult!". I did not learn my lesson, as you will see in a moment.

Haruo Minami's song was supposed to be my last song and a cheerful-sounding tune seemed like a good way to round up this amazing ordeal. Even Mom, who initially declined the offer, put out a decent "Ai San San" (before my turn). Still, the audience urged for one more, and of course, I relented.

Having seen my interest in Mihashi, the owner encouraged me to go with another one of his works. Being a bit more sane this time, I refused as I know many Michi songs are tough and require, as J-Canuck had once said, vocal gymnastics. But I wanted to select something that would garner the same amount of frenzy, which I did. Sadly, that one also needed a bit of vocal gymnastics.


As a friend of mine would say, "Go big or go home." I wasn't going home then, so I went big with the regal-sounding "Osho" by the fierce Hideo Murata. Hearing the music, I thought I should channel Murata by standing straighter with shoulders squared, chin up and wearing a no-nonsense look on my face. For that moment I felt... proud and powerful. I was doing it for them. Suddenly, for some weird reason I found that funny and broke the facade by snickering to myself. Nevertheless, it was a satisfactory finale and the oldies were pleased.

That about wraps up my Sugamo escapade. I wouldn't say that I'm particularly outstanding vocal-wise since I went off-key a few times due to not being able to hear myself or simply freaking out, but my audience were a really nice and supportive bunch, cheering me on even when I thought I didn't deliver a song as well as I had hoped. I made some friends that day. The icing on the cake was when they spurred me on with multiple "Ganbatte-s" and a "Good luck" as we were leaving, and a couple of them insisted they shook hands with me. It was an honor to do so; I felt like I was an enka singer. Commemorative photos had to be taken too.

And then one of them asked, "Will you be coming back?" That actually stung because I didn't know when I could go back, so I just replied with a vague "I don't know". But I will go back, and when I do I hope they'll be there.

In my next article, I'll talk about a live event in Ikebukuro.
Posted by Noelle Tham at 8:59 AM