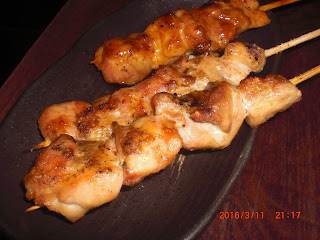 I had a nice afternoon and night out last night. Met up with my movie-and-foodie buddies who are a long-married couple. With the husband, we got to enjoy "Now You See Me 2" in the VIP theatre before we met up with his wife downtown for a good dinner at Kintori, a yakitori restaurant where we ate mass quantities. The above photo is actually from our trip to Zakkushi, another popular yakitori place but I haven't bothered to upload last night's photos into the hard drive yet.


So, starting with a food theme in mind, I have a video from one of NHK's longest-running shows of all time, "Kyo no Ryori" (きょうの料理...Today's Cooking) which started all the way back in 1957. I think Japan is even more of a foodie nation than the US and Canada and has been for decades before the term foodie was first coined. Just judging from the number of daily cooking shows and the celeb segments of A-class and B-class tarento hitting the restaurants to go into spasmodic orgasms whenever they pop spoonfuls of dishes into their mouths, the Japanese do love the whole culture surrounding food as much as they actually love eating the stuff...and that goes for Japanese, Italian, French, Chinese, etc. Therefore, "Kyo no Ryori" is as much of a living fossil in that genre as a coelacanth. Even I had no idea that the show was that old, and yet it turns up daily on TV Japan.


Usually that cheerful theme for "Kyo no Ryori" comes on at 4:30 on weekdays. Therefore, it was a mild surprise this morning when I actually heard it this morning while NHK's "News Watch at 9" was broadcasting at 8am (Tokyo is 13 hours ahead of Eastern Daylight Time). I was having breakfast at the time when the theme popped on and it turned out that after all that shameful kerfuffle about Tokyo's Governor Masuzoe resigning, the news shifted to the funeral service for legendary composer Isao Tomita（冨田勲）who had passed away on May 8th this year.

I wrote my first article on the late Tomita a few months ago before he passed away and spoke on his hauntingly beautiful version on "Clair De Lune". Also, I mentioned how I first heard about his techno music as a teenager in the 1980s browsing around in the neighbourhood Sam The Record Man. But I had absolutely no idea that he had been creating music as far back as the 1950s. And yet Tomita, who looked like a techno hippie on his albums, was the guy behind the creation of one of Japanese TV's most recognizable theme songs. I would say that just about everyone knows the theme song to "Kyo no Ryori".

That theme which still dances across the screen and from the TV speakers was right there playing when the show first started in 1957. According to the article on the show in J-Wiki, Tomita's cute creation hadn't been meant to be used for this cooking show but on the eve of the first entry in "Kyo no Ryori", the powers-that-be decided to push the song into service. Tomita wanted to link the song with the purpose of the show so the percussion was meant to sound like cleavers chopping away on the wooden board. And the rest is history.


So I learned this morning that Tomita hadn't been just about the synthesized soundscapes but also about the daily jingles.