Finally managed to pull myself away from the manga "Berserk" after finishing the Golden Age Arc. While I enjoy the story line and the complex main characters, I can't deny that Kentaro Miura has created something that's graphic in all sense of the word, and he seems to like drawing eyes popping out of the sockets of victims of vicious violence. It's either that or that's what really happens if one gets sliced down the head with an obscenely huge sword.

Alright, eyes flying out of eye sockets aside, I would now like to touch on the items that were of high priority on my Japan to-do list: visiting the memorial halls of Yujiro Ishihara (石原裕次郎) and Takashi Hosokawa. I've decided to split them into articles of their own since I think they may be quite long, and I'll start with the former since I went there first. 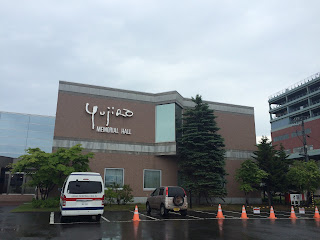 I don't remember how I came across the Ishihara Yujiro Memorial Hall, but the moment that I saw it was in Otaru, and that we would be dropping by the canal town somewhere along our itinerary, I was determined to go. After all, I wouldn't want to miss a chance to see a whole building dedicated to everyone's favourite Tough Guy. 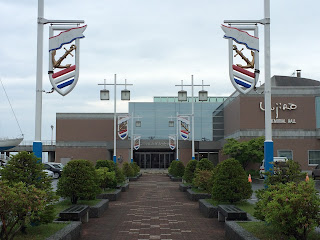 Despite the day being rainy and starting off on the wrong foot, all the negativity got erased the moment I stood at the memorial hall's entrance and saw the words "石原裕次郎記念館". It really cheered me up. All the more when the first thing that greeted me upon entering was Hiroshi Tachi (舘ひろし)... 's cut-out. Dang, while my smile was not as wide as anticipated, my hands were grabbing on to my grey newsboy cap so tightly I thought would have torn it!

As to why there's a "Tachi" sitting on a the "Hato bike": there's a "Seibu Keisatsu" (西部警察) area in the hall's foyer that displayed some of the show's popular character's vehicles. Standing by the iconic vehicles were cut-outs of the actors that played the respective characters. So there were also cut-outs of the cool Tetsuya Watari (渡哲也), a.k.a. Yujiro's right-hand man, beside a crazy weaponized car, and the man himself beside something sporty and more normal. Unfortunately, I don't remember the names of the vehicles as I was too enamored by their drivers/rider. Plus, other pictures of Ishihara and the gift shop had me buzzing around just this one area alone. 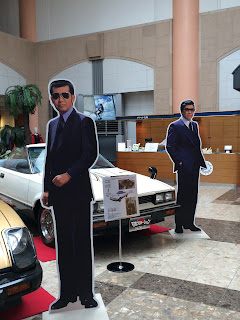 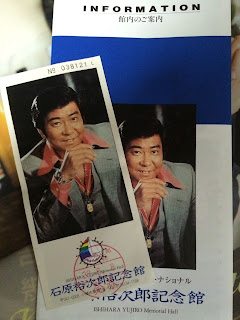 As mentioned, this was only at the entrance, there was a huge area in the back (that required the purchase of tickets) that showcased the popular singer-actor's professional life and personal life. No photo taking was allowed there - being the idiot I can be sometimes, I immediately forgot about that and took some photos, but deleted them out of guilt after seeing a "No Photos" sign halfway through - so I'm not able to show you guys the incredible effort that was put into documenting his life, but I can say that they even displayed his swim trunks and the labels and corks of champagne he used to drink. There was also a section that told of his love for sailing, which stemmed from his childhood, and a section on his life in Hawaii. Oh, and Yu-chan in his early days was cute. 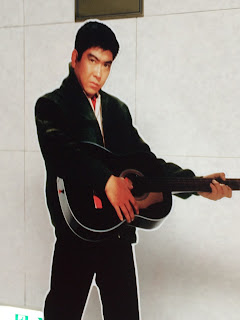 While I do like Yujiro and hold a great deal of respect for him, somehow I wasn't as moved as I thought I'd be when wandering around his memorial hall. Poignant, yes. But not emotional. On hindsight, perhaps it was because my main motivation of going there was actually to see the Tachi cut-out, as crazy as that sounds - if you've read my articles on Mr. Dandy, you'll know why.

However, there was one part where I did sort of feel moved. And that was when I heard "Yogiri yo Konya mo Arigatou" (夜霧よ今夜も有難う) at the start of the "No Photo" zone where they were playing clips of a handful of Tough Guy's movies along with the respective movies' theme songs in a theater-like environment. Of course, there were other tunes I enjoy like "Arashi wo Yobu Otoko" (嵐を呼ぶ男) and "Ginza no Koi no Monogatari" (銀座の恋の物語), but it was "Yogiri..." that had ninjas attempting to cut onions. I guess it's as close as I could get to hearing one of my favourite songs being sung by the original singer. 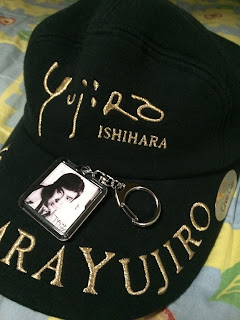 When all was said and done, it was time for souvenirs at the gift shop. It was something I had been looking forward to as well because firstly, it was quite big and well-stocked, and secondly I had eyes on a cap that had Ishihara's name on it. I did get the black one, and while it is actually rather large for me despite being the smallest size, heavy, and made of a thick material, I love it. Besides that, I got a key-chain with a black and white photo of Tough Guy that I'm currently using as a bag accessory, and the "Yogiri..." single (y'know, just 'cause). Just some physical souvenirs to accompany the incredible experience.

Epilogue: While not much time was spent in Otaru, we did also visit the that iconic canal that's a must-see for those visiting the place. Well, to be frank it was kinda underwhelming; I thought it was bigger but it was rather quite picturesque. And it wasn't a complete waste either as along the waterway were 2 music plaques: the first featuring "Otaru no Hito yo" (小樽のひとよ) by Tokyo Romantica, and the second featuring "Ore no Otaru" (おれの小樽) by Yu-chan. 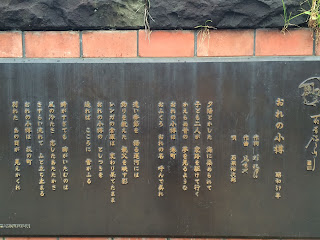 If you're wondering why Yujiro's museum is situated in Otaru rather than his birthplace of Kobe, it's because he spent his childhood in this seaside city. And I think he really liked the place as he could sail in his Yachts, one of them being the Hale Contessa, if I'm not wrong.


"He was strong-willed & innocent.
He shall give us beautiful dreams and hopes forever."