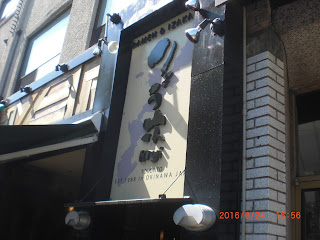 It's been a fairly washoku（和食）weekend for me. Well, I have Japanese food all the time at home but what I meant was that the past couple of days have been spent with friends and colleagues enjoying the fare outside. On Friday, I met up with my fellow translators for dinner at a Okinawan-style izakaya known as Ryoji in Little Italy before going up College St. a few blocks away for further drinking at another izakaya named Hapa. I think it was the first time in over 4 years that I've actually done any sort of hashigo (barhopping...literally translated as "ladder") where J-watering holes are concerned...mind you, Friday's affair was just one rung on the ladder.


The earnest hashigo that I experienced regularly was back in my Gunma days over 25 years ago. The teachers back there could really knock them back...and I guess teaching junior high school kids can bring its own share of stress. Anyways, barhopping in the wilds of the Japanese Alps usually meant the main dinner and then a drink at an izakaya or nomiya followed by a late-night slurp of ramen or ochazuke. One time, we even went 5 stages...I don't remember much from that. However, karaoke would somehow inevitably slip itself among the rungs at one of the bars.

"Hanamachi no Haha" (Mother of the Hanamachi District) would be one of those enka songs sung at the bars. Because the teacher group on the hashigo would mostly be in their thirties and older, enka and Mood Kayo were often the genres of choice. The thing about "Hanamachi no Haha" was that it wasn't my first choice for a Tatsue Kaneda（金田たつえ）song tonight. Earlier this afternoon, I was watching NHK's "Nodo Jiman"（のど自慢）weekly song contest and heard one of the citizens try out what was probably a much later Kaneda single but couldn't find any information about it at all. So, looking at the singer's J-Wiki discography, I did see one song that picked up attention and that was "Hanamachi no Haha". And as it turned out, it is an enka that I have heard over the years without knowing the original singer or title.

Tatsue Kaneda was born and raised in Sunagawa City, Hokkaido Prefecture in 1948. And a few years following her win at a minyo-singing contest when she was an early teen, she made her way to Tokyo in 1965 at the age of 17 and ended up marrying the president of the company representing her in the same year! A couple of years later, she made her debut as a minyo singer.


However, Kaneda decided to make the genre shift to the more popular enka for which she debuted with "Hanamachi no Haha" in June 1973. Written by Shohei Mozu（もず唱平）and composed by Toshi Miyama（三山敏）, the sad song is about a geisha performer who longs to be with her daughter after so many years but cannot do so due to the demands of her profession. The hanamachi mentioned in the title, by the way, refers to the geisha district of a city or town (believe me, I am no expert on the life of a geisha but this is what I've been able to pick up online so if there are any errors in the above, please let me know). Despite the gentle melody by Miyama, the lyrics gradually make it clear that the geisha has resigned herself to her lot in life and can only imagine what her daughter may be doing.

According to Kaneda's biography on J-Wiki, the lyrics also hit the singer hard in the heart. Originally, "Hanamachi no Haha" was only meant for release in the Osaka area but Kaneda felt that the story in the song resembled elements in her own life so she pushed the people around her to have this released in a much wider area. It gradually became known nationwide and 6 years later in 1979, it finally became a hit (although Kaneda had also released 18 or 19 other singles by that time) and even got her an invitation to appear on the Kohaku Utagassen for that year for the first time. By 1988, the single managed to sell over 2.5 million records.
Posted by J-Canuck at 8:17 PM