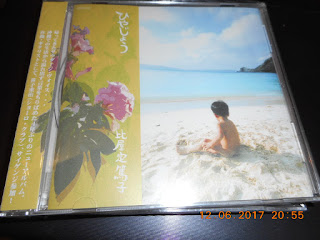 Back in November last year, I came across Atsuko Hiyajo's（比屋定篤子）"Kokoro Tokashite"（心溶かして）, the first track of her 4th album "Hiyajo" from February 2004, and was immediately charmed by its bossa nova. In fact, I liked it so much that I purchased it as part of my Xmas shopping blitz.


Track 2 is "Otome Knockout Night"（乙女ノックアウトナイト...A Knockout Night for a Young Lady）which was written by Hiyajo and composed by guitarist Shigeharu Sasago（笹子重治）is a cute and scampering piece of bossa nova that I've enjoyed for Hiyajo's use of onomatopoeia at the beginning of each line. I really felt like picking it up and stroking it behind the ears.


"Yuuhi no Uta"（夕日の唄...Song of the Setting Sun）is another mellow ballad that I enjoy as well. Her voice and lilting delivery make this track one of my favourites. Hiyajo was responsible for both words and music.


"Kimi wo Terasu yo"（君を照らすよ...I'll Shine On You）is a peppy number with a goodly amount of percussion as Hiyajo sings about a couple who are obviously very much in love. I would say that it's the ideal song to walk along a tropical beach including Copacabana Beach in Rio de Janeiro itself. Saigenji provided the music to her lyrics.


To wrap up, here is the final track from the album "Tsuki no Hoseki"（月の宝石...Moon Jewel）. Another Hiyajo/Sasago collaboration, there is some more nighttime jazz mixed in with the bossa and I think it's a good way to finish the album before retiring for the evening. I would love to listen to Hiyajo sing this one in a classy hotel rooftop club in Tokyo. If only I could afford the New York Grill on the top of the Park Hyatt Hotel. 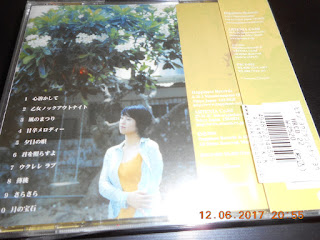 So "Hiyajo" is another hit album for me. It makes for some fine nighttime listening or even as a disc to be played during a rainy Sunday afternoon. The tracks bring in some tropical sunshine but can also evoke that luxurious evening feeling.
Posted by J-Canuck at 4:36 PM