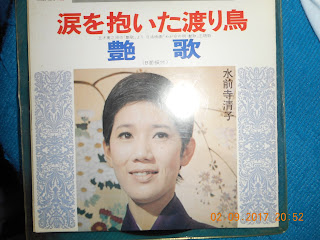 Considering that January 30th is the anniversary for the blog, I think this song is pretty appropriate, and it just happened to fall into my lap.


On last week's edition of NHK's "Uta Kon"（うたコン）, one of the guests performed this happy tune titled "Arigato no Uta" (The Thank You Song), and I found out that it had been originally performed by none other than Kiyoko "Cheetah" Suizenji（水前寺清子）. Listening to the original single (her 33rd) from May 1970, the song fits Suizenji's onscreen and onstage personality: brassy, cheerful and larger-than-life. Hiroko Ohya（大矢弘子）wrote the lyrics while Gendai Kanou（叶弦大）provided the music.


If you're wondering about Suizenji performing "Arigato no Uta" in a nurse's uniform, that was because the song was the theme song for her own TV series, "Arigato" which lasted 4 seasons on TBS from 1970 to 1975 (although there was a 14-month gap between the end of the first season and the start of the second season). Cheetah appeared in the first three seasons with each season having her play a different character in a different setting. So, Season 1 had her being a rookie police officer, while in Season 2, she was a nurse and then finally in Season 3, she took over her family's fish shop.
Posted by J-Canuck at 9:39 PM