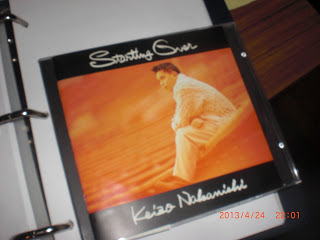 Been some months since I listened to Keizo Nakanishi（中西圭三）so it's nice to hear his golden tones yet again.


When I was first recommended to give Nakanishi a try back in the early 1990s, I (naively) thought that there was a certain resemblance to Toshinobu Kubota（久保田利伸）, both in their looks and genre of music. But listening to both fellows over a long period of time, I've come to realize that there are distinct differences.

For one thing, whereas Kubota has proceeded a lot more into funk, I think Nakanishi presented himself initially more as the old-fashioned Motown showman. I could envision him leading a doo-wop group onstage on the old Ed Sullivan show. And I think his "Glory Days" has that updated Motown sound.

A track on his 3rd album "Steps" from March 1993 (it hit No. 1 on Oricon), Nakanishi took care of the rousing music while Masao Urino（売野雅勇）came up with the lyrics about a student falling for a young female student of mystery from afar. His description of the inner glow within her coming to the fore in his eyes reminded me of that famous speech by Jimmy Stewart to Kate Hepburn in "The Philadelphia Story" about her own incredible internal luminescence threatening to blind all others. Kinda too bad though that the protagonist may not get a chance to finally pour our his feelings to the lass before she graduates. Not sure if the glory days of the title refers to Nakanishi reminiscing about his time in school or about the time to come for his lady love.

Still "Glory Days" is another one of his peppy and happy tunes whose sound always says "Nakanishi" to me.
Posted by J-Canuck at 8:16 PM