In a post on Etsuko Yamakawa by J-C, I commented on how she had worked her magic for a particular Onyanko Club song.  Curious as to how it had all gone down, I went  back in time in order to come forward into the past ...

Mari Wilson was a British pop singer in the early 80's who eventually moved into jazz (and still performs).  While a teenager she spent some years in New York and fell under the spell of Motown and Philly soul, styling her music and look as  60's retro.  Her 1982 song "Beware Boyfriend" was composed by Teddy Johns and arranged by Tony Mansfield, reached #51 on the UK charts, and released in 1983 as an EP in Japan.

Japan ?  Mari had been discovered in the UK by Tot Taylor, whose band Advertising had flopped there but was "big in Japan".  He also headed a highly-regarded indie label - The Compact Organization - and Tot was referred to as the "British Eiichi Otaki" ( イギリスの大瀧詠一 ).  During the early 80's his jazz and techno-inspired offerings were popular in the Aoyama import record shop Pied Piper  (   パイド・パイパー  ); where fans included members of the Moonriders, Sandii and the Sunsetz, Yukihiro Takahashi (YMO), and the Pizzicato 5 (Tot's influence can be heard in what was to become Shibuya-kei). He released "Beware Boyfriend" into the Japanese market on his label.

Personally I find this song to be ponderous, flat, and the vocals rather ominous - beware indeed, boyfriend.  There are some interesting instrumental flourishes but on the whole, not quite my cup of Earl Grey.  However ...

In 1983 Marlene Pena Lim ( マリーン・ペーニャ・リム ) covered "Beware Boyfriend" ( ボーイフレンド ) as an EP and on her album Deja vu ( CBS Sony ).  J-C has already dipped into Marlene's career and though much of her work is still up on YouTube, the mp3 for this song was pulled (not before I grabbed it).  The lyrics stay the same and are entirely in English, but the arrangement is now credited to Masanori Sasaji ( 笹路正徳 ) who styled it for Marlene's more jazzy delivery.  The entire song is brighter and more upbeat with a very clean production, the vocals swing, and while we're not yet in aidoru-land we're on our way.  Some of the distinctive instrumental riffs have been kept and the EP cover screams sultry tsundere.  Still beware, boyfriend.

(J-Canuck here: actually found an excerpt of Marlene's cover via the Sony Music Shop above.) 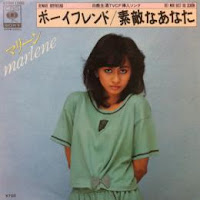 Her version was used in a CM for Hakushika (White Deer) Sake, making a third go-round for "Beware Boyfriend".  But like a cat it had multiple lives ...

Spring of 1986 found Onyanko Club preparing for their first longitudinal tour (and graduation for Nakaji (#5) and Sonoko Kawaii (#12) ).  March 1986 saw the release of the second album "Yume Catalogue" ( 夢カタログ ) and on side B was: "Umbrella Angel"  ( アンブレラ・エンジェル )

( Note: the video has nothing to do with the song; the poster used a section of the 4-DVD set "Onyanko Club - Backstage Pass" that documents the spring tour from behind the scenes).

Yes, it's almost "Beware Boyfriend".  New lyrics by Yasushi Akimoto; vocals by Mamiko Takai (#16) with backing from Mako Shiraishi (#22), Susan Yamamoto (#32), and Minayo Watanabe (#29); and arrangement / keyboards by Etsuko Yamakawa.
Etsuko was responsible for arranging 4 of the 10 songs on Yume Catalogue (and 15 total for the 5 canonical Onyanko Club albums).  The new lyrics are from a male point of view - the young man is caught in a sudden downpour when a strange girl suddenly appears to give him shelter under her umbrella - his Umbrella Angel (and all the romance a shared umbrella implies).  She gets on her bus and rides away, but as he watches wistfully a rainbow appears to connect them.  Beware, no more.
The music is full of trademark Yamakawa-isms: the song bounces, muted crisp drum rolls kick it along like running through the rain.  Soft voices are layered to build up to a snazzy jazz break that rides on cymbals and flugelhorn, then rolls seamlessly back to the vocals.  The upward-chiming instrumental rideout is pure Yamakawa-Onyanko.  (Interesting that the original vinyl album insert uses English for production, writing, arranging, and instrumentation credits - everything else is in Japanese).

And while Mamiko had a brief solo career before becoming Mrs. Aki-P, when she graduated on Yuuyake Nyan Nyan in April 1987: