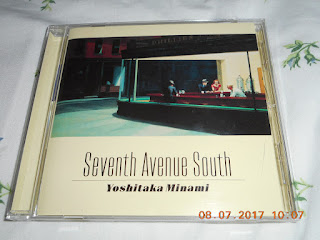 A couple of days ago, I was talking about that "Techno Kayo"（テクノ歌謡）album and its first track, the somewhat wacky "Uchuujin Wana Wana"（宇宙人ワナワナ）by Apache（アパッチ）.


Well, the second track has got its own technopop milieu as well although it's a bit less flighty. One reason is that it is composed and performed by the great Yoshitaka Minami（南佳孝）who has dabbled with a number of genres but for "Akogare no Radio Girl"（Radio Girl of My Dreams）, it seems to be a hybrid.

Written by Takashi Matsumoto（松本隆）, it's all about a man falling in love with a late-night female radio DJ but for me, it's Minami's music that hooked me in. Seemingly a mixture of 50s/60s American pop filtered through synthesizers and all sorts of other technology, I'm kinda wondering if the singer was also into a bit of ELO.

"Akogare no Radio Girl" came out as Minami's 7th single in 1980 and as the first track on his 5th album "Montage" that was released in May of the same year.
Posted by J-Canuck at 2:28 PM