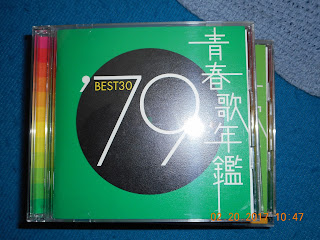 I've had this song bookmarked for several months so I gather that it's time to give its due on the blog.


One thing I gotta say about Ami Ozaki（尾崎亜美）. Not only has she been a great singer and songwriter but she has had this ability to come up with these upbeat tunes that are mainstream pop but have all of the energy of an aidoru number. I realize that she has also been seen dabbling into AOR and City Pop but I think her "Kokoro ni Make-up" (Make-up for the Heart) is just good ol' pop.

Written and composed by Ozaki, it was initially the B-side to her 9th single "Slow Dancing"（スローダンシング）from June 1979 but was also included in her 5th album later that October, "Little Fantasy". "Kokoro no Make-up" continues that kayo tradition of masking some melancholy feelings in some happy music that follows a woman getting over the shock of a failed romance. As much as she would apply the cosmetics on her face to cheer her up and get back into the world, she realizes that she also needs some of that make-up for her bruised heart.

I did say that Ozaki's upbeat numbers have the energy of aidoru tunes but there is something about the arrangement that elevates things from the usual teenybopper song. "Kokoro no Make-up" starts with the melodic equivalent of a motorcycle rumble before launching into the air. And then there are the disco strings, the synths and the thumpy bass. Come to think of it, perhaps I should label it as a City Pop tune after all.

There are some heavy hitters in the band, too. Along with Ozaki herself on the Prophet 5, there is Shigeru Suzuki（鈴木茂）on guitar, Tsugutoshi Goto（後藤次利）on bass, Jake H. Concepcion on alto sax, and Hideki Matsutake（松武秀樹）with the synthesizer programming.
Posted by J-Canuck at 8:33 PM