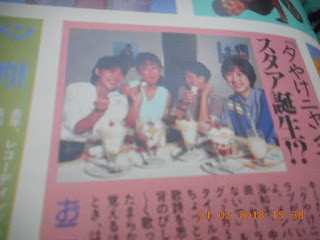 I've chatted a few times here and there on the blog with folks like Marcos V. on the point that aidoru in the late 1980s had the interesting benefit of having some rather lush arrangements granted on their singles which elevated things a good bit despite perhaps some of these ladies not possessing the strongest of vocals. Added to that fact is that back in that same decade, I was able to listen to a number of aidoru tunes through borrowed tapes or even through the radio program "Sounds of Japan" without ever finding out the lasses' names or even the titles.


Well, that got me started in trying to track some of those "lost" tunes down. So where do I begin? I figured that I would launch my trek through the largest source of aidoru in that particular time frame: Onyanko Club（おニャン子クラブ）. This great ancestor to all of the current alphabet aidoru groups such as AKB48 and NGT48 was quite the modular teenybopper organization since a number of the members had their own solo careers with others forming smaller sub-units. Therefore, I think it is quite the mother lode to search for these aidoru and their songs.

It didn't take me too long to make a catch...or a re-catch, if you catch my drift. As soon as I heard this on YouTube, my Spidey Sense of nostalgia and recognition lit up like a flare at night. Let me introduce Onyanko Club Member No. 16, aka Mamiko Takai（高井麻巳子）and her 3rd single "Yakusoku" (Promises) from December 1986.


Wowsers! As soon as I heard those urgent strings and classy keyboards start "Yakusoku" off, the hair on my arms stood up at attention. How long has it been since I heard this one? Takai's vocals don't sound too bad here but it's that sweeping arrangement by Nobuyuki Shimizu（清水信之）of Masahiro Hatta's（八田雅弘）melody and Masao Urino's（売野雅勇）lyrics that had me hooked on this song. The beat keeps things moving along at a pretty fast clip, too.

"Yakusoku" hit No. 1 on Oricon and ended up as the 55th-ranked single of 1987. The song also made it onto Takai's 2nd album "Kokoro Biyori"（こころ日和...The State of Affairs of the Heart）, released in July 1987. Between 1986 and 1988, the aidoru would release 8 singles and 4 original albums. In May 1988, she retired from show business for a good while after getting married to songwriter Yasushi Akimoto（秋元康）. So did that make her a den mother of sorts to all of the ladies in AKB48 and beyond?
Posted by J-Canuck at 5:08 PM