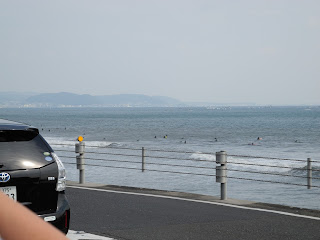 Nope, sorry, couldn't find any photos with big waves among my 2014 Japan shots. But then again, I didn't think that the shores of Kanagawa really had anything to rival the monsters in Hawaii.


The preamble above was to introduce another tune from the Misato Watanabe（渡辺美里）file. This time, it's "Big Wave Yattekita" (The Big Wave Has Come), her 26th single from July 1993 that has that hint of a surf rock song thanks to Yasuyuki Okamura's（岡村靖幸）melody and Takeshi Kobayashi's（小林武史）arrangement. Watanabe wrote the words to this cheer-up song that says when love has got you down, there's nothing like hauling the surfboard and hitting the waves to get back on top.

"Big Wave Yattekita" crashed into the Top 10 by peaking at No. 7 and it was also the title track for Watanabe's 8th album "Big Wave" which also came out in the same month. It hit the top spot on Oricon and was the 18th-ranked album of 1993. However, outside of her very early 90s discography, my interest in the big-voiced singer started to wane around here. She was still making some nice tunes but they weren't quite on the same level as her output back in the late 1980s.
Posted by J-Canuck at 4:12 PM