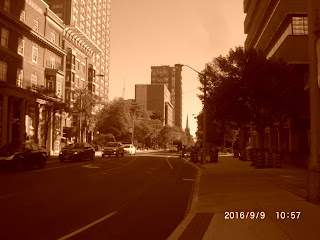 Some snow, some freezing rain, a lot of driving misery today, I'm sure. And we're all still heading out for dinner tonight. But alas, that has been our winter this year.


At least I'm not the poor protagonist in Alice's（アリス）17th single, "Shuushifu" which was released in December 1979 on the same day as the folk duo's 16th single "Utsukushiki Kizuna ~ Hand in Hand"（美しき絆〜Hand in Hand〜...Beautiful Bond）. The fellow in that ballad is going through some major blues. As for the title, I'm going to reiterate the kanji here「秋止符」which I think is a kanji pun devised by Alice since I couldn't actually find such a term in the dictionaries. However, there is the term「終止符」which is pronounced in the exact same way and refers to the grammatical period at the end of sentences. In fact, according to the J-Wiki article about the song, it has often been mistakenly written as「終止符」.

I think "Shuushifu" for the Alice song probably means "Autumn Full Stop" as in the romance is dead and buried. And as I've mentioned in past articles about kayo with an autumnal theme, that particular season is often the climactic symbol for the death of relationships. It's not a happy story by Alice member Shinji Tanimura（谷村新司）but his partner Takao Horiuchi（堀内孝雄）weaves a fairly jaunty folk melody around it. The song got as high as No. 4 on Oricon and became the 20th-ranked single for 1980. It is also on the duo's 7th album "ALICE VII" which was released in June 1979.

Some months before Alice's release of "Shuushifu", though, Miyuki Yokoyama（横山みゆき）had come out with the first version as made by Tanimura and Horiuchi. It was actually her debut from September 1979. Her "Shuushifu" has more of a European-sounding arrangement which perhaps would take her song into the category of those exotic kayo songs that were popular in the late 1970s.

I don't know if Yokoyama's version got up onto the Oricon charts but her time as a singer lasted into the early 1980s with 8 singles and 3 albums during that time.
Posted by J-Canuck at 2:15 PM