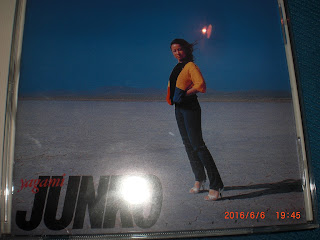 I have to admit that I did something that perhaps I shouldn't have and that was to fall for the CD Japan sales ploy of warning me that I have a finite amount of points to use before the expiry date (although I'm not blaming the company...it's my choice). But being the fan that I am for Japanese pop music, there is just so much out there that I would love to purchase and explore. One of the CDs that I had been aiming for was Junko Yagami's（八神純子）"Communication" album from 1985.

As I mentioned in my article for one of the tracks from "Communication", the bubbly and catchy "Cashmere no Hohoemi"（カシミヤのほほえみ）, the album was the launch point for a new direction in Yagami's music. Back in the 1970s, her music was punctuated by some Latin-tinged New Music before making a switch into City Pop in the early 1980s, but then with "Communication", she decided to veer into more of the American R&B/pop that was doing very well back then. Regrettably though, no copies of that particular CD exist on CD Japan or Tower Records, and anything from Amazon costs an amount which is too rich for my blood (and I'm already battling high cholesterol, thank you very much). Plus, being an old-fashioned stick-in-the-mud traditionalist, I'm not interested in downloaded albums.


Having said that, I would still like to profile one other song from "Communication". In fact, it's the first track "Imagination" which starts out with a bang and a sample of that new sound which seemed to be Yagami's clarion call to all those out there that she's doing something different, so deal with it. Double in fact, I think even Yagami's lyrics kinda hint most assertively that there is a new Junko in town. She basically dares the listener to come and join her.

That synth crash which launches everything at the start makes things sound so quaintly and adorably 80s and I've gotta admit that Yagami's vocals are still amazing, especially when she goes into that second verse. They are just as bright as the synths and the whole song brings her right onto the dance floor. I gather that the Bubble Era of Japan's economy can commence from right here. Anyways, some thirty years later, a Future Funk version of "Imagination" can probably also commence as well.
Posted by J-Canuck at 8:45 PM

Email ThisBlogThis!Share to TwitterShare to FacebookShare to Pinterest
Labels: 1985, J-R and B, Junko Yagami, Pop, Single