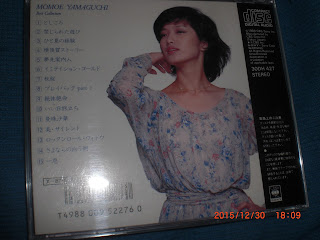 Some years ago, I was listening to my "Momoe Yamaguchi ~ Best Collection"（山口百恵）, and I was still getting a handle on her hits since there were some that I had never heard before. One of the tracks near the end of the CD was "Be Silent" which was rather punny since if it were translated directly, it would be "Beauty Silent", but the folks behind the song Ryudo Uzaki and Yoko Aki（宇崎竜童・阿木燿子） probably wanted to dovetail that meaning with that on reading of 「美」.


The other noticeable thing was within Aki's lyrics. There are a couple of lines which go:

I want your XXXX
Because I like XXXX that is burning.

And those lyrics as they appear above and on the lyric sheet are official. Now the music by Uzaki has got some fire and heat in there right from the start although the first few bars sound like a gentle country & western number before rolling into an urgent Spanish-sounding tune with that oomph that her fans had probably come to expect from the husband-and-wife songwriting duo. Then Yamaguchi sings about getting all hot and bothered about her guy who seems to be playing hard to get for some reason before those two lines pop out with the horns succinctly and strongly emphasizing the unspoken words.

Of course, with my mind oftentimes having the maturity of a 12-year-old, when I first heard "Be Silent" the first few times, I started snickering and softly snorting like Beavis AND Butthead: Yeah...nyuk, nyuk...I know what she said, heheheheh...


Well, after a cold shower and several Gibbs slaps on the back of the head, I eventually found out from the J-Wiki article that what she meant to say but mouthed during any live performances were words like "jounetsu"（情熱...passion）and "tokimeki"（ときめき...palpitations）and "hitotoki"（ひととき...a short time）. Apparently the source of that was from an episode of "The Best 10" from April 26th 1979. And if you look at the performance above on Fuji-TV's "Yoru no Hit Studio"（夜のヒットスタジオ）, you can see her at least mouthing something. Still, co-host Jun Inoue（井上順）in the introduction was also being a bit cheeky about those missing words just before Yamaguchi started.

"Be Silent" was released as Yamaguchi's 25th single in March 1979. It got as high as No.4 on the Oricon weeklies before ending up as the 34th-ranked single for the year. It is also a track on her 17th album "A Face in a Vision" that came out in April. That peaked at No. 3.
Posted by J-Canuck at 10:07 PM