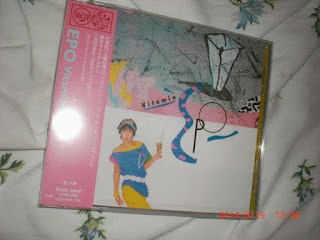 Along with a lot of the other singer-songwriters of the time, love in all of its manifestations, good or bad, was a favourite topic for one of my favourite chanteuses, EPO.


Over here, EPO takes on the green-eyed monster that is jealousy through "Mugon no Jealousy" (Jealousy Without A Word) which was a track on her 5th album "Vitamin E-P-O" from April 1983. Not sure if the protagonist here is going after a past love or a love-yet-to-be, but the person is bent out of shape about the target of his/her affections perhaps getting together with a new love.

The notable thing about "Mugon no Jealousy" is the music by EPO herself. It has that sort of funky rumble that I had initially couldn't quite place but then I took a look at the comments for the video above, and one person remarked that it felt absolutely like The Spinners' "Could It Be I'm Falling In Love", so perhaps some late Motown in there. Not so certain that it's an absolute thing but I got at least a hint of it. What I did pick up on was near the end when the melody got some choppiness a la Chuck Mangione's "Feels So Good", so perhaps Motown going into fusion.


Kunio Muramatsu（村松邦男）from Sugar Babe did a cover of "Mugon no Jealousy" for his debut solo album "Green Water" which came out some months after "Vitamin E-P-O" in September 1983. Titled simply "Jealousy", he replaced EPO's lyrics with his own, and it sounds more like a City Pop tune to my ears with that horn section. Muramatsu has a softer delivery here in contrast with the original singer's oomph.
Posted by J-Canuck at 3:13 PM