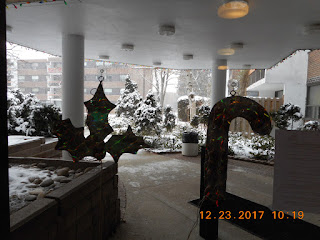 I've been looking at the live streaming videos on YouTube for the Tokyo area just now and it's looking positively white out there. The snow has been unrelenting. One would think that Toronto sent an EMS package of winter to the nation's capital. We Torontonians have gotten some more snow ourselves in the past few days. Forgive me for being Captain Obvious but I don't think we'll need that groundhog tomorrow...heck, even the groundhogs themselves aren't gonna bother coming out of their holes on the 2nd. Six more weeks of winter!


Not too surprisingly, this past episode of "Uta Kon"（うたコン）devoted its episode to snow-themed songs with a friendly warning at the beginning of the show for folks going out to be careful out there. Some familiar tunes appeared but then came this one called "Yuki no Furu Machi wo" (In A Snowy Town) made its presence known.

It caught my eyes and ears since the music by Yoshinao Nakada（中田喜直）was weaving back and forth between solemn and hopeful. The opening part had singer Hideo Koh（高英男）sound as if he were trudging grimly through the accumulation while the snow was coming down before the music suddenly changed into something more hopeful...perhaps the blizzard stopped and the sun peaked through the clouds showing a beautiful landscape in white.


Anyways, as "Uta Kon" concierge Shosuke Tanigawa（谷原章介）narrated and as was written on the J-Wiki article for the song, Nakada based the melody on the snowscape in Tsuruoka City, Yamagata Prefecture where an acquaintance of his once lived. Naoya Uchimura's（内村直也）lyrics aside, I would say that the song was signifying that traveling in the stuff may be hell but once you get back home in the snowy mountains, that scenery is worth it.

Interestingly enough, the genesis of "Yuki no Furu Machi wo" didn't come out of any intention to pay tribute to winter. It was first heard on NHK Radio in 1951 when it was used as an insert song on a drama called "Eriko to Tomo ni"（えり子とともに...Together With Eriko）. The producer found out that for a rehearsal for one episode, there was a bit of extra time hanging so he called out for someone to whip up a tune as some musical padding which brought in Koh and his song. Sooner than you can say "kismet", it became a hit with listeners so that little filler which got pushed into the radio show was extended with one or two more verses to become the full song which was released in 1952.

Koh, who was born in 1918 on the island of Sakhalin, had just returned from studying at the Sorbonne in France when he recorded "Yuki no Furu Machi wo". Although his big hit isn't really in this genre, he was apparently known as the First Chanson Singer of Japan. Koh also appeared 7 times in the early years of the Kohaku Utagassen between 1953 and 1961. He passed away in 2009 at the age of 90.


Singer-actress Chieko Baisho（倍賞千恵子）, along with many others, gave her cover version of "Yuki wo Furu Machi wo" although I don't know when. Her version sounds more like a folksy lullaby. The song even made its way onto NHK's "Minna no Uta"（みんなのうた）twice in 1961 and 1966, naturally both times in December.
Posted by J-Canuck at 8:09 PM