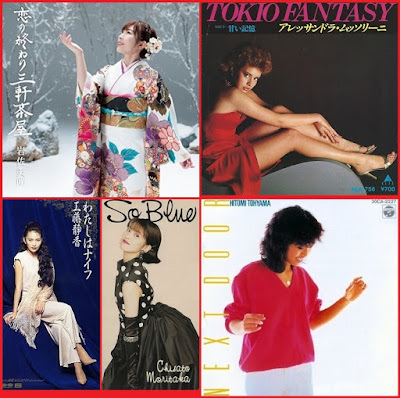 The 80s to 90s shift was too big for most of the bubble era superstars. Shizuka Kudo (工藤静香) probably didn’t feel it right away, but, by 1991~1992, she had to try harder to release a timeless classic that could rival with her string of successful singles from the late 80s. She did hit it big in 1993 with “Doukoku” (慟哭), but the following one, “Watashi wa Knife”, just skipped the mark entirely, turning, in retrospect, into one of her most obscure and underrated singles (the song wasn’t included in any of her original albums, only appearing in a couple of compilations over the years, and, besides the usual TV performances, was performed only in one of her major tours).

Curious as it is, “Watashi wa Knife” is my favorite among Kudo’s 90s singles, even though I agree it’s far from being her best. However, there’s something about the lively synths and horns that always get me, and I like how she had already matured into a sexy 90s aidoru both in the vocals and image at the time of its release.

Yeah, we’re talking about Benito Mussolini’s granddaughter here, Alessandra Mussolini, who is now a politician in her country, Italy. However, during the 80s, she ventured into modeling, acting and, of course, music. Also, if it wasn’t enough, the whole story becomes even more unusual when we learn that her first and final album, “Amore” (1982), was sold only in Japan, and that she sang a couple of songs in Japanese as well, with “Tokyo Fantasy”, probably the main single, being the best example of it.

A melancholic disco song that can even be labeled City Pop by the most enthusiasts, “Tokyo Fantasy” is, surprisingly, a very solid song. The whole atmosphere, drenched in this strange mix of dreamy romantic naivety with bits of sadness (the sharp keyboard notes after the chorus), coupled with the sexy early 80s disco beat, is something hard to absorb, but it’s kinda rewarding. And the coupling song, a melancholic tune called “Amai Kioku”, deserves a listen as well.

Recently, Alessandra suddenly became known to the English-speaking world, but not because of her almost forgotten music career. Apparently, Jim Carrey posted something regarding her grandfather on Twitter and she became angry about it, resulting in a quick discussion or something like that. As a Brazilian, well…, let’s say I already have my own right-wing problems here in my country right now, so I will not try to understand how Alessandra keeps her grandfather’s political history alive in today’s Italy. The only thing I can say is that I quite like the Alessandra Mussolini who sings sad love songs in Japanese atop of a light disco beat. She seems like the queen of this alternative universe where it’s totally okay to have the granddaughter of a famous fascist dictator trying to be a songstress in Japan. Not strange at all.

When it comes to Chisato Moritaka (森高千里), I like her 80s and very early 90s songs way more than the mid-to-late 90s stuff. The exception to this rule is “SO BLUE”, which was released as a single in 1996, and reveals one of Chisato's main influences aside from the Euro/Aidoru stuff: 60s pop-rock and, more specifically, The Beatles.

In “SO BLUE”, we can easily hear some nods to “Hey Bulldog”, one of the songs released by The Fab Four in the “Yellow Submarine” soundtrack back in 1969, and considered a throwaway by John Lennon.

I’m no Beatles fan (but my father is a huge one, by the way), but if I had to choose one of their songs, “Hey Bulldog” would be the one, just because of how funky and cool it sounds. Now, in the case of “SO BLUE”, I like how Chisato creatively uses parts of a song from one of her favorite bands and turns it into something else. The addition of strings is also a big plus, and combined with the constant piano, it helps creating the whole classic European feel, yet with a rock-y twist.

About a month or two, when I was watching an episode of NHK Nodo Jiman (NHKのど自慢) on TV, ex-AKB48-member-turned-into-Enka-singer Misaki Iwasa (岩佐美咲) was the female guest on the show. At the end, as usual for the guest singers, she sang one of her own songs, which happened to be the latest single “Koi no Owari Sangenjaya”.

Released back in early 2019, “Koi no Owari Sangenjaya” is not that heavy and more traditional Enka song we are all familiar with, being rather a Showa-Era ballad with a gorgeous arrangement and a slightly Latin feel in the background. The melody is quite romantic and I like Iwasa’s vocals since I first listened to her rendition of the classic “Ringo no Uta” (リンゴの唄) a couple of years ago, so this song is a big winner in my book.

I wanted to finish this kinda eclectic collection of songs with something mellower, and, from what I’ve selected before writing the post, Hitomi Tohyama’s (当山ひとみ) “Goodbye~Sharp ni Daite” seemed like the obvious choice here.


My first time listening to Penny was five years ago, thanks to J-Canuck here, and, since then, some of her songs have become an integral part of my oldies playlists, with my favorite being “Instant Polaroid”, taken from the first album “Just Call Me Penny”. Another personal highlight, and the one being introduced here, is called “Goodbye~Sharp ni Daite”, which was released in 1983 as a part of the “Next Door” album.

A typical mid-tempo and groovy City Pop ballad with some nice jazzy bits, what I like the most here is the chorus and how she intonates the word goodbye in many different ways. I don’t really know what she wants when she sings ‘sharp ni daite’, but it seems like she wants to be hugged in a passionate way before parting away with her lover. I don’t know, since I didn’t take my time to carefully translate the song, but that’s how I like to feel it anyway. Other than that, the song is beautifully arranged, and Penny’s soulful rendition makes it even more special. A great night listen, in my opinion.


Just a PS on my (J-Canuck) comment on Alessandra Musolini's "Amai Kioku"...I actually did find a Vaporwave version.
Posted by Marcos V. at 10:07 PM