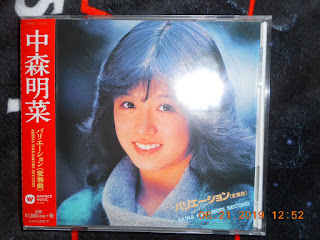 It's July 12th here in Eastern Canada but it's already July 13th in Japan....which means that it's Akina Nakamori's（中森明菜）birthday! 😃 So, lets first have the gang from "Sesame Street" fulfill the festivities here. 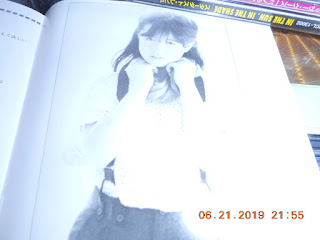 OK, now as such, I think today is an appropriate day for me to present Akina-chan's 2nd album "Variation ~ Hensoukyoku", and as was the case with her debut album, "Prologue ~ Jomaku"（プロローグ〈序幕〉）, that latter Japanese term is just the translation of the former word. "Variation" was released in late October 1982, a little less than 4 months after "Prologue", and as the title for the 2nd album would have it, it's been praised by a book called "Hotwax Presents Kayo Kyoku Meikyoku Meiban Guide 1980s"（Hotwax presents 歌謡曲 名曲名盤ガイド 1980's...Hotwax presents Famous Songs and Recordings Guide 1980s ）for having some more variation in the song stylings due to the different songwriters at work here along with the singer's progress in her abilities.

Three of the tracks have already been covered in "Kayo Kyoku Plus", the hit single teen rock "Shojo A"（少女Ａ）, the City Pop "Yokohama A-KU-MA"（ヨコハマA・KU・MA）and another urban contemporary tune "Aishuu Majutsu"（哀愁魔術）.


"Variation" is book-ended by some dramatic strings by Kei Wakakusa (若草恵...who helped arranged the album along with Mitsuo Hagita/萩田光雄), and the album then starts off with the wild and woolly "Cancel!"（キャンセル！）which has some similarity to "Shojo A" in that it's got that teen rock sensibility with the fast beat and the wailing guitar. Composed by Kazuhiko Izu（伊豆一彦）, the lyrics are provided by Masao Urino（売野雅勇）, the same guy behind "Shojo A", as Akina plans to drop a phony of a beau like an anchor.


The following track is "Moroi Gogo"（脆い午後...Sentimental Afternoon）has a couple taking a secret trip to Kyoto. It's a wistful mid-tempo song characterized by those strings that seemed to have accompanied many an Akina number in the early days of her aidoru career. The strings could be jagged or, as it is in "Moroi Gogo" more sweeping to fit the more vulnerable side of the singer here.


The strings take on even more character in "Sakihokoru Hana ni..."（咲きほこる花に……To the Flowers in Full Bloom）as they start off sounding more like late Beatles, but then remind me of some of the Fashion Music that Chika Ueda（上田知華）helped create at around the same time. However, words and music were actually provided by Etsuko and Takao Kisugi（来生えつこ・来生たかお）...which then made me go "Ahhh...naruhodo" since whenever the Kisugi sister-brother combination get together to create music, it's always of pretty refined quality. It seems like the entire song is devoted to the beauty of flora, so there is that overwhelming image of having a cup of tea in a high-class shop with a window view of one of the great gardens in Japan.


From that tea shop in a well-manicured garden, we head off to Tokyo Disneyland or some beach paradise via "Meruhen Location"（メルヘン・ロケーション...Fairy Tale Location）to join a couple on a date. It's an aidoru tune with that touch of Resort Pop, and even some country twang near the end as the lucky pair enjoy each other and their travels to fantasy land. As was the case with "Yokohama A-KU-MA", Tsuzuru Nakasato（中里綴）was the lyricist while Noboru Mimuro（三室のぼる）was the composer.


"Dai Nana Kan ~ Septieme Sense"（第七感（セッティエーム・サンス）...The 7th Sense）at 30:33 above in the full album is Akina being happy and coy in the embrace of some saxophone-led City Pop. Mayumi Shinozuka（篠塚満由美）and Yoshitaka Minami（南佳孝）created this light shuffle of a song with a bit of Latin which seems to have the lass walking through an autumn forest as she perhaps considers her options about shedding one guy for another. The fact that one of Shinozuka's lyrics repeats Akina getting pelted with a shower of autumn leaves hints that change is in the forecast.


The rock feeling and the wailing guitar are back for "x3 (Bye-Bye) Lullaby"（X3 (バイバイ) ララバイ）, and usually when it does, it means that Akina is in trouble. In this case, she's just been dumped near a Yokohama interchange, but the tough one simply brushes the cad away like dust and basically sings a big kiss-off. The tandem of Yukinojo Mori（森雪之丞）and Yasuo Kosugi（小杉保夫）, who were also behind "Aishuu Majutsu", worked on this one. Strangely enough, the verses sound similar to the Manhattan Transfer's "Twilight Zone" from the late 1970s. For me, I especially like Akina's delivery here...very sultry and sweet.


The finale is "Catastrophe Amagasa"（カタストロフィの雨傘...Catastrophe Umbrella）which has a style reminiscent of a French pop ballad from the 1960s and a contemporary kayo ballad by Mariko Takahashi（高橋真梨子）. Shinozuka from "Dai Nana Kan" is back to write the lyrics as Akina sings about taking a rainy walk soon after the end of a relationship. She's taking it relatively well considering that the title includes the word catastrophe (which was kindly explained in the liner notes in terms of what it means...I'm not even sure whether the word is still known now in Japanese katakana), and as Tsunehiro Izumi's（和泉常寛）melody hints, tomorrow is another day. There is always hope for the future.

I mentioned about the Queen Bee theory in the article for "Prologue" when it comes to Nakamori's upbringing in music, so I wonder with all of these songwriting talents involved in "Variation", whether there was a sign that the then-teen aidoru was being seen as a potential superstar so all of the genres were being thrown at her as a challenge. Those powers-that-be then should take a bow since all of the types of music featured in the album did appear in bulk in the rest of Akina's discography going right to the end of the 20th century. Perhaps then, "Variation" might be seen as an even more seminal release.

"Variation" hit the top spot on Oricon as Nakamori's first No. 1 album and it stayed there for a total of three weeks according to "ALBUM CHART-BOOK COMPLETE EDITION 1970 〜 2005", a part of Oricon's marketing promotion. It hung out on the charts for 29 weeks and ended up as the 8th-ranked album for 1983, selling around 440,000 LPs and 300,000 tapes.

Anyways, I hope that Nakamori will enjoy her 54th birthday! 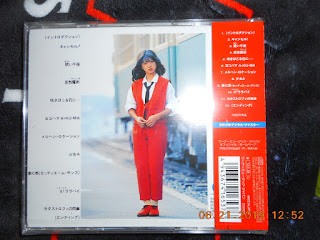