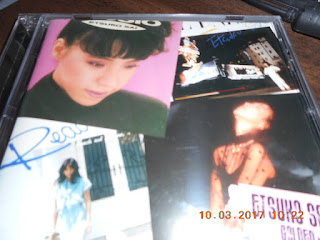 I was reading kaz-shin's "Music Avenue" blog entry from October 19th 2010 about the singer Etsuko Sai（彩恵津子）. He had been half-jokingly wondering aloud in his article whether Sai's voice was good or bad. However, he did point out that it did stand out, and regretted the fact that such distinctive vocals were far and few between at that time. I wonder what he would say now.


However, he has gone to the floor to say that Sai's 1986 album "Passio" is his favourite album, and considering that tracks "Eien no Morning Moon"（永遠のモーニング・ムーン）and "Airport Dance" are now part of KKP, I think that I may have to get my own copy of this one. Moreover, there is this track from "Passio" titled "Pygmalion".

Although kaz-shin stated that he was in that quandary about Sai's vocals, he also admitted that they were strangely comforting. I've got no problems about her voice whatsoever and it does stand out since it is high but it also has a bit of huskiness in there. As for "Pygmalion", it does sound fairly familiar to something that I've heard before but I can't quite place the song. It's not the Sheila E. percussion, though. "Pygmalion" doesn't exactly aspire for Top 10 ambitions but it's a pleasant enough City Pop/R&B tune written by Chinfa Kan（康珍化）under his pseudonym Shirusu Morita（森田記）and composed by Tetsuya Tsujihata（辻畑鉄也）with arrangement by Yuji Toriyama（鳥山雄司）.
Posted by J-Canuck at 3:34 PM