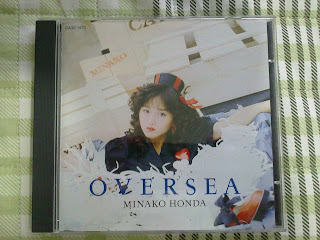 As I’ve written years ago in my article for “That’sThe Way I Want It”, Minako Honda’s (本田美奈子) “OVERSEA” album, released in June 1987, is my go-to one in the late singer’s discography. Maybe it’s not her strongest offer, but it’s easily the one I like the most and, very recently, I was finally able to buy my own copy of the album, surprisingly enough, here in my own country, Brazil (it’s a relief not to pay for import taxes).

After the release of “1986 no Marilyn” (1986年のマリリン) and the album “LIPS”, both representing her famous Madonna-wannabe phase, Minako Honda took a plane to London and started working with a myriad of musicians, which resulted in an album called “CANCEL” and two interesting singles, “the Cross-Ai no Juujika-” (愛の十字架) and “Crazy nights / Golden Days”, produced by Gary Moore and Queen’s Brian May, respectively. Also, girl surely had a somewhat crazy schedule back then, since she had to go back to Japan between all the networking and recording sessions to promote the stuff there, her main and mostly sole market.

Between all the work in London, Honda still found some time to release a Japanese-produced single, the nice “Oneway Generation”, and, soon enough, was already working on a new album, but this time in the US, with musicians who had worked in La Toya Jackson’s then latest album, “Imagination”. It’s no wonder the aptly titled “OVERSEA”, the final result of this American project (by the way, Honda recorded the whole album in English), is a collection R&B and synthesized-funk of the mid-80s, such as the opening song “Sneak Away” and the already covered “That’s The Way I Want It”, with the occasional soulful ballad, “Take It or Leave it” (an Evie Sands cover, originally released in the 1974 album, “Estate of Mind”) being my favorite example of these, thrown away in the middle of it.

A heavier funk sound is introduced in the album’s second half by the single “Heart Break”, thanks to its sick and relentlessly hypnotic bass sequence that catches all the attention. And there’s also “Plaything”, which follows it, standing as one of the airy and light R&B songs more in the lines of “That’s The Way I Want It”.

The final song is called “You Can Do It”, and it’s also an Evie Sands cover, but this time from her 1979 album, “Suspended Animation”. With it, the funk is back, but this time is the muscular, groovier and more laid-back version of genre, making this song one of the highlights of the album. Love the bass, the synths and even Honda’s performance here.

The “OVERSEA” album reached #4 on the Oricon charts, selling around 58,000 copies (source: http://wagamamakorin.client.jp/saku-minako.html). After its release, but also of “Midnight Swing” in December 1987, Minako Honda changed her music style once more, becoming the frontwoman of the all-female hard rock band Minako with Wild Cats in 1988. Anyway, that’s when my interest in her faded away.

Finally, to see the musicians who worked on “OVERSEA”, here’s the link to the album’s Discogs page: https://www.discogs.com/pt_BR/Minako-Honda-Oversea/release/6088147.
Posted by Marcos V. at 4:44 PM