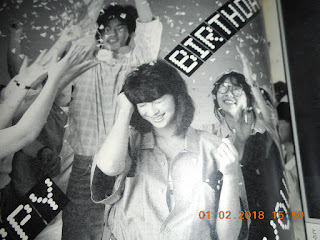 When I first came up with the Follow-Up category for the blog, I'd already written a lot of articles on various songs and albums, and so it was to give my fellow collaborators on "Kayo Kyoku Plus" that reassurance that they were more than free to give their own opinions and stories on songs that they liked that had already been written about by me. I may have done a Follow-Up myself for a song by Marcos or Noelle or JTM or nikala, but I can't remember one recently.


I listened to Naoko Kawai's（河合奈保子）"Love Letter" tonight, her 7th single from December 1981 and enjoyed it hearing again so much that I decided to give my take on it even though Marcos put down his own article on it back in 2014 for which I've already given my comments.

My take on the Osakan-born Kawai is that she, along with Seiko Matsuda（松田聖子）and Yoshie Kashiwabara（柏原芳恵）, represent that very first group of aidoru that I'd fallen for when my love for kayo kyoku sprouted in earnest at the time of their debuts. I knew about Pink Lady and Momoe Yamaguchi（山口百恵）before through the various VHS tapes but at the time, I had no idea about what aidoru was. Naoko, Seiko and Yoshie were therefore the first aidoru that I got to know. As for Hiromi Iwasaki（岩崎宏美）, although she was probably still considered an aidoru even in the early 1980s and most likely though I've even categorized some of her early 1980s material as aidoru, I think that she had already blossomed into a full pop chanteuse at the beginning of that decade.

Kawai's "Love Letter" is the quintessential sound of aidoru music that I got to know. Added to her ever-cheerful vocals was the combination of disco melody, soaring strings, enthusiastic horns, happy chorus and big electric guitar. Especially in "Love Letter", that guitar really sings in its solo. I would really like to know who was handling that when it was recorded. Despite the December release, this is all about summer living.

Marcos has already mentioned how well it did on the charts, so allow me to say that "Love Letter" got its album debut on "Summer Heroine"（サマー・ヒロイン）, Naoko-chan's 4th original album released in July 1982. That album got all the way up to No. 6.
Posted by J-Canuck at 10:58 PM